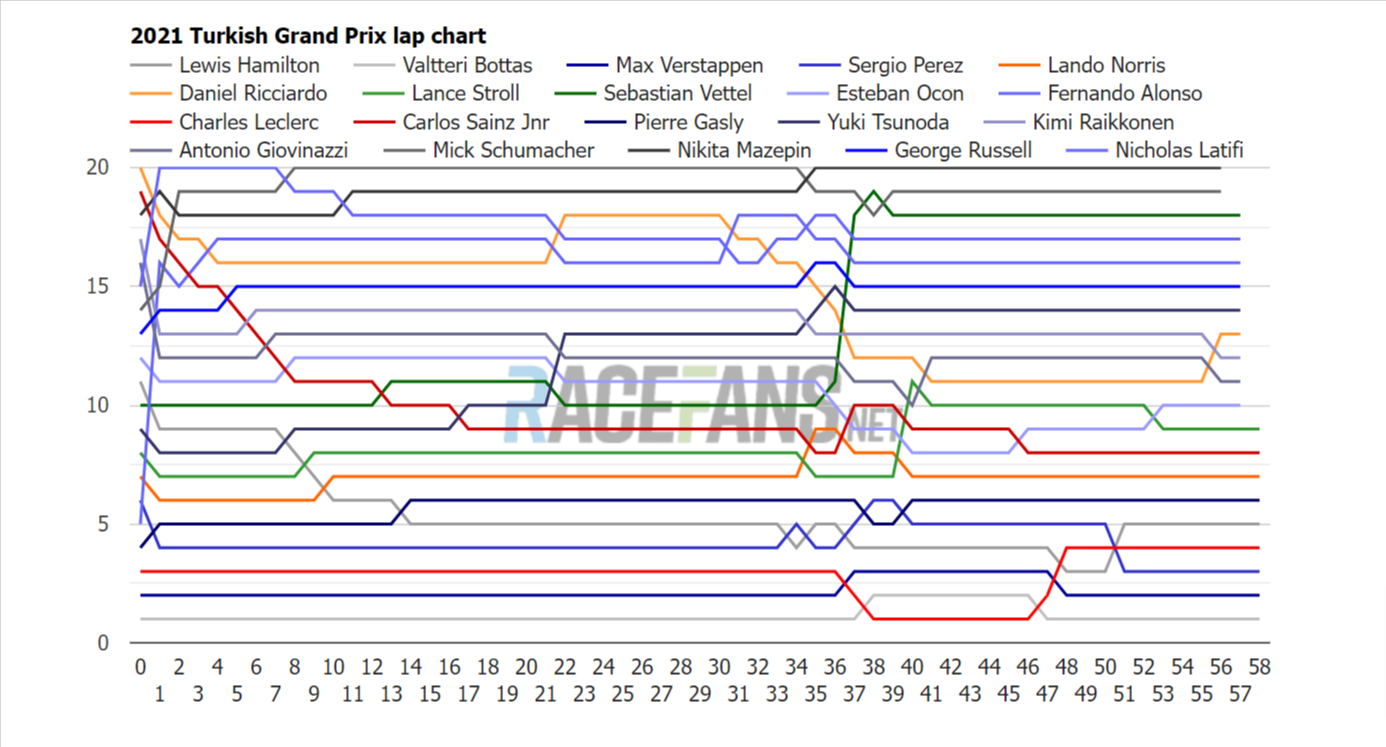 The Turkish Grand Prix was all about tire strategy, but not how we might be used to seeing it.

Rather than a question of which compound would be best to use when or whether to run a one- or two-stop race, the decision was entirely down to timing, with a few drivers and teams being notably right – or wrong.

Prior to the race, Pirelli had considered whether it would be possible to do a one-stop race. In the end, every bar driver Sebastian Vettel made it. And his strategy of switching to medium compound slick tires while others switched to more intermediate tires was, he admitted, a mistake.

In terms of single pitstops, however, the variation in the length of their initial stint was high. Daniel Ricciardo was the first, after 21 laps, while the last driver at the pit was Lewis Hamilton, on the 50th lap.

Esteban Ocon drove the entire race on one set of tires. He fell within one lap of the total distance after being passed. Does his example show that Lewis Hamilton should have avoided stinging when he did?

The Alpine rider’s lap times indicate that, as frustrated as Hamilton may have been with the late pit stop, he was right to stop in the final laps of the race. Ocon’s pace dropped sharply in the closing stages of the race. In the last eight laps, he lost 22 seconds to teammate Fernando Alonso, exemplifying the kind of loss Hamilton suffered had he not fished.

Daniel Ricciardo was in equally dire straights despite having installed new intermediaries earlier in the race. He suffered from severe tire degradation, turning two seconds slower than even Ocon on the last tour.

Ocon saved a point with his daring strategy. The mishap of his teammate Alonso in the first round spoiled his afternoon. However, Carlos Sainz Jnr made a superb comeback after starting from the back of the grid, climbing 11 places to eighth place.

The positions of each pilot on each lap. Click the name to highlight it, right click to reset. Switch the drivers using the commands below:

The differences between each driver at each lap compared to the leader’s average lap time. Very large deviations omitted. Scroll to zoom, drag to pan, and right click to reset. Switch the drivers using the commands below:

All driver lap times (in seconds, excluding very slow laps). Scroll to zoom, drag to move and toggle pilots using the command below:

The fastest lap of each pilot:

Pneumatic strategies for each driver:

How long did each driver’s pit stops last: