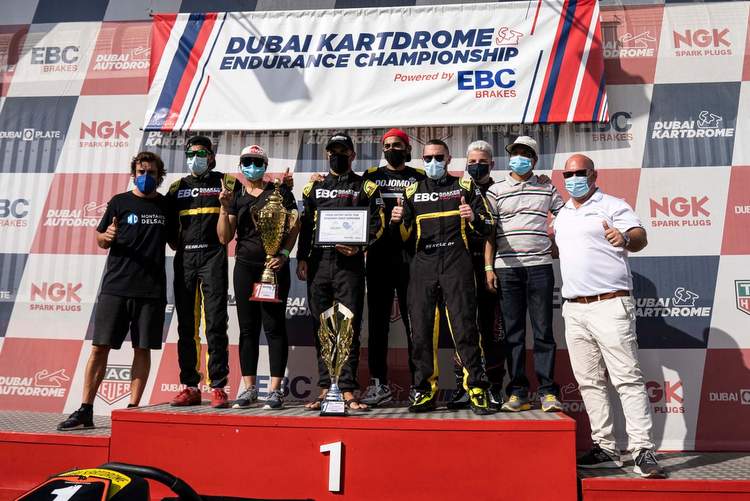 The final round of the 2021 Dubai Kartdrome Endurance Championship Powered by EBC Brakes ended in an exciting way with the top three teams on the same lap after a grueling 24 hour Kartdrome race that started on Friday and ended on Saturday.

At 1:00 p.m. Dubai time, EBC Brakes Racing crossed the finish line not only to win the region’s most prestigious karting race but also to claim the 2021 Dubai Kartdrome Endurance Championship title which earned them a free ticket to the Spanish 12 Hours Karting. at the Fernando Alonso Circuit.

Talking about the two-time F1 world champion, who took part in the epic Abu Dhabi Grand Prix Formula 1 season final a week earlier, showed he was a master in all forms of racing.

The Spaniard led his team, including former F1 driver Pedro de la Rosa, F3000 ace Angel Burgueno and Bulgarian karting sensation Nikola Tsolov to pole position for the 17th edition of the race, after having won the deciding grid of the Sprint race to the roars of approval from the assembled crowd at Motorcity.

This set the tone for the 28 teams to fight, with Bugueno starting the race for Alonso’s MD Racing and leading from the start, achieving the fastest lap of the race during this impressive stint.

What followed was an intriguing battle between half a dozen teams, as strategy combined with speed of movement played an important role.

After 24 hours, the top three teams were only three seconds apart, with second place being decided in the final corners.

In the finals, the top three edged ahead a few laps with EBC Brakes Racing now and controlling a quarter-lap lead they held on to an impressive 25-second victory after 24 hours.

Drama ensued in the last lap of the 1132 laps, Alonso’s MD Racing looked set for third place, but a superb final stint from SuperDryver Maffi Racing saw them take the lead with a few turns remaining, to steal. second place for just 0.181 seconds.

By the time the dust settled on the debates, the race and the big trophy belonged to the newly crowned champions – EBC Brakes Racing – whose drivers Arjun Manjunath, Duarte Lopes, Boris Bovier and Mickael Mota have proven to be the best of the best in the world. during a difficult race. 24 hours.

Their victory achieved despite the absence of regulars Anjum Sheikh and Kyle Kumaran who contributed, during the three previous rounds, to winning the Endurance Champions at the Dubai Kartdrome 2021 on Saturday.

Loyal to the race since the first 24 Hours of the Dubai Kartdrome 17 years ago, Fly Emirates (EGKC) did enough by finishing seventh overall to claim the Corporate Team Championship title, beating Hoxton Capital Management to the prestigious honor. .

Alonso: Fantastic race it’s really one of the times of the year for us

Reflecting on an intriguing final, Kartdrome manager and race organizer David Bright said: the top three in sight on the last lap.

And what a last lap SuperDryver Maffi Racing took second place from Alonso’s MD Racing team. You couldn’t script it!

â€œA big thank you to Fernando for winning the hearts and minds of everyone who was in this race. He was engaging, friendly and relaxed. At the same time, he was super competitive and really wanted to win this one. Next time buddy!

“In closing, a big thank you to all the officials, marshals, Kartdrome staff, the incredible drivers, their good-humored teams, our EBC Brakes sponsors and all our partners for making this event so great. We are already waiting for the next looking forward, â€Bright concluded.

Last word to Fernando Alonso: â€œIt was really fantastic. It really is one of the times of the year for us, a group of friends gathered here at the Kartdrome. We are having so much fun. It’s 24 hours of pure driving pleasure and the atmosphere with the teams and drivers is really pleasant. We will be back!”