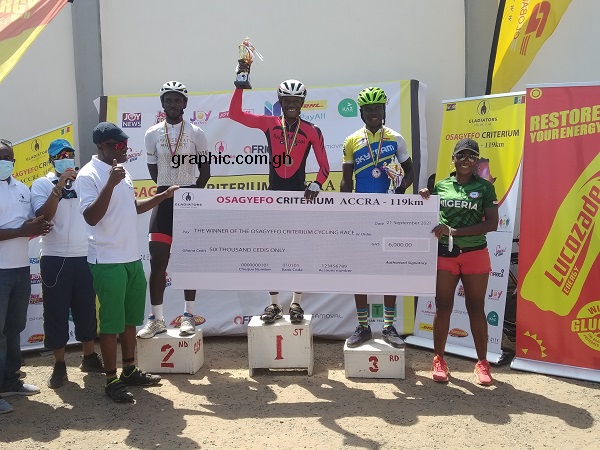 Left to Right: Chief Gladiator Kojo Graham presents the dummy check to the winner of the race. with him is from LR: Solomon Tagoe, Abdul Rahman Abdul Samed and Saliou Mohammed.

National cyclist Abdul Rahman Abdul Samed won his first race of the year today (September 21, 2021, in a spectacular sprint, edging Solomon Tagoe and Saliou Mohammed to victory in the first edition of the Critérium Osagyefo 2021 in Accra.

In an interview shortly after crossing the finish line, Abdul Samed said he was almost certain of the pre-race victory because he worked on the mistakes that saw him finish second in the race. Granfondo Cycling race last month.

As with all sports the more you participate the better you become, so after finishing second last month I was in pole position to win this race, ”said Abdul Samed.

According to him, his strategy of following the race leaders for 27 laps and starting seven laps from the end worked perfectly. He added that his main goal was to win enough championships in Ghana to become a fixture on the European cycling calendar.

Clementina Ayong won a GH ₵2,000 cash prizes after winning the title of female champion, winning the women’s 15-lap race in a time of 1:29:15 while young Berlinda Kutsiame established herself as the top young rider.

All cyclists received medals and souvenirs from sponsors DHL and Lucozade.

A total of 87 cyclists took part in the race organized by the Gladiators Cycling Club to mark the birthday of Osagyefo Dr Kwame Nkrumah.

Romain Grosjean says kids should dream of racing in IndyCar, not F1