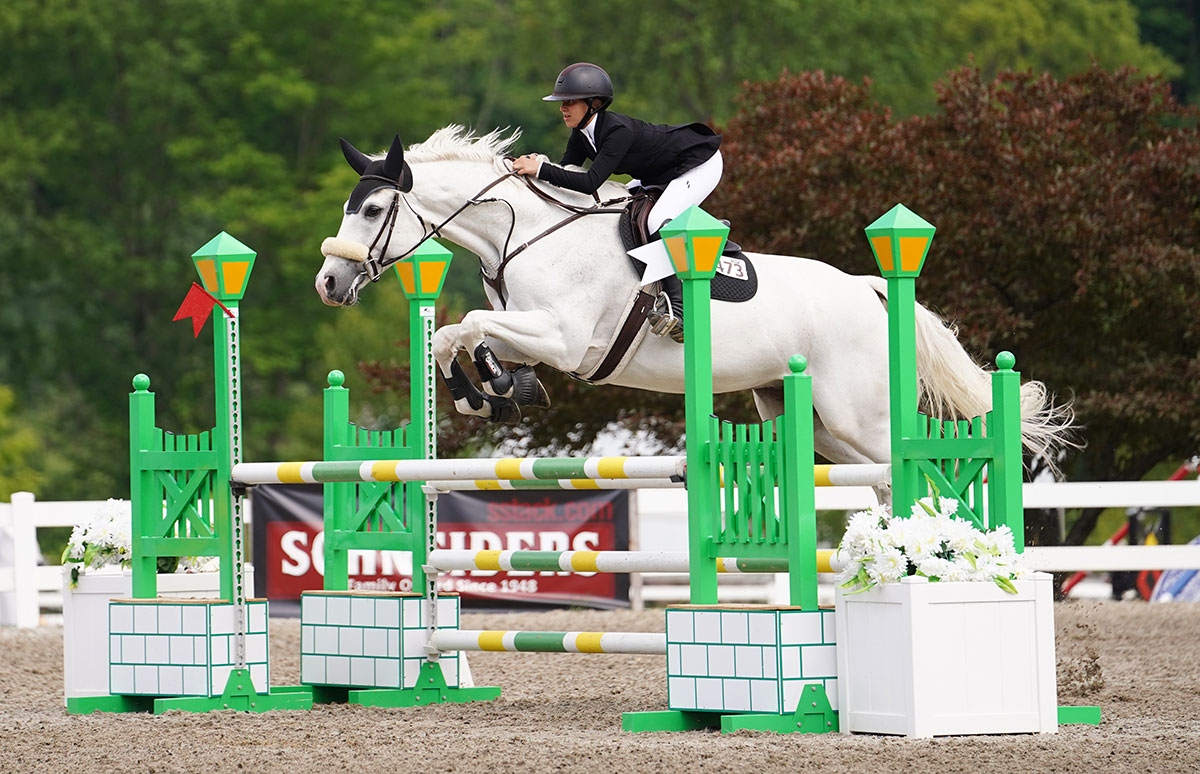 Six-year-old Aiva Gamelin had a choice: get a show pony with an excellent record or…Cosmo, a little gray bit (at 11.1 hands) of a grumpy pony known for laying down to get rid of anyone pretty annoying to try to ride it. She chose the latter. A failed pony mount, Cosmo ended up in a paddock at Aiva’s (Sue Peterson) grandmother’s Another Farm, in Woodbury, Connecticut. He had not only failed to be ridden, even directing him rarely proved successful for a child foolhardy enough to attempt him.

Aiva spent time with Cosmo, sitting quietly with him in his enclosure, just with him. Sometimes she would crawl over him and just sit on him while he grazed. He didn’t try to dump her. Aiva patiently brought the pony in with her grandmother (a skilled and beloved trainer) and the help of her mother (Yvonne Milewski Gamelin), teaching her how to do flatwork and learning to jump. Connecticut Hunter Jumper Association champions and the little pony won a Conformation Pony Hunter class against eight “true conformation ponies.”

Yvonne says Aiva has the drive and Cosmo has the heart: “That’s when I knew I was in real trouble!”

What started with Cosmo continued throughout Aiva’s junior career. She not only had the skills, but also the empathy to bring out the best in ponies and horses that others have abandoned. With Abenaki Native American blood running through her veins, Aiva’s innate spirituality allows her to connect with horses and ponies in a way few others can.

Aiva overtook Cosmo and transitioned into small and medium pony hunters and pony riding, winning championships and year-end awards across much of the country. Working with Rabbit Hill Farm’s Abbi Ferrigno in the pony divisions, Aiva has won countless championships and year-end awards. Abbi also taught Aiva how to nail a Pony Derby, Aiva’s favorite class (in which she has won many victories), and practical hunters, and prepared her for future success in the hunter world. With her phenomenal small pony hunter Rock Lobster, Aiva finished fourth nationally in 2019 and was zone champion two years in a row.

The switch to horses, big eq and show jumping was equally successful.

After training with her grandmother and mother, Aiva began riding with Steve and Jenni McAllister at their farm in Ocala, Florida. Jenni, a World Cup and Grand Prix rider, along with Steve taught Aiva to focus on sportsmanship on the ground and in the saddle, following all FEI rules. Aiva has spent the past two winters riding their sweaters and bringing her own sweater, Mr. Lopez. A very talented horse, Mr. Lopez, like Cosmo, has some issues.

While he loves jumpers and is blessed with abundant talent, “George” hates the school ring. Facing an oncoming horse can cause him to panic. Aiva is careful at George’s school when they can be alone in the school zone. It was a super successful approach; George won nearly every children’s show jumping in Ocala last winter. One of Aiva’s favorite parts of spending the winter with the McAllisters was learning about alternative treatments to horse medication, such as acupuncture, chiropractic, magna waves, stretching, icing and exercises to build George’s muscles to help prevent injury.

Aiva will start grade 9 at Shepaug Valley High School while continuing to work hard as a horse rider and taking advantage of the many opportunities her grandmother and mother have given her.

Currently training with Belle Equestrian’s Shachine Belle at The Hill at Graywall Farms, Aiva says she is “so lucky to have the best of the best working with me and my horses.” Ever grateful to her trainers, she says they are all “hard working, active and always looking out for the horse’s best interests”. She is also grateful to the many friends who have helped her by giving her amazing sales horses to ride and show to help enhance her career, such as Amanda Nicole Shine Wise and Topher Lamond of Penniless Farm in Wagner, Alaska. North Carolina, who took her under their wing for several months in 2021 when Aiva was 12.

“They let me ride so many of their amazing hunter/jumpers and they have the most amazing farm. It was such an amazing experience. I’m also grateful to my grandmother Sue Peterson for everything she did to get me here and for presenting me with many opportunities, but most of all for finding George “Mr Lopez”.

Sue knew George was a star, and her close friends and boarders (John and Karen Pollard) bought him so “he could be retired long-term to my grandmother’s farm.” He enjoys his late night participation and treats, two important factors in his training. He doesn’t like head-on traffic in the school zone, so we have to be careful and keep him focused, but he’s a winner in the ring. He has so much heart, once we get in that ring together, we get into our zone and go for it, we just trust each other.

The two won the $2,500 High Children/Adult Classic in Ocala, Florida at the HITS Horse Show, and were the High Children Champion and Reserve Champion on the 2022 HITS Ocala Tour. They came back north for HITS Saugerties winning the $7500 Kids/Adult Classic in week two and then took victory in the Low Jr Jumper at the Saratoga Horse Show. At the HITS Summer Festival, they won the $2,000 High Children’s Classic, cutting two seconds off the second fastest time of 32 seconds to finish in 30 seconds.

Aiva was thrilled to qualify for the prestigious event. “I was insanely excited because all the hard work going on behind the scenes allowed us to achieve my goal.”

She has been busy this season taking Clarkson University’s Business and Bias in the Equestrian Industry course with Dr. Piper Klemm and is a proud member of the Metropolitan Equestrian Team. Aiva is extremely grateful to the incredible network around her for giving her so many opportunities. It’s a family affair with her mum and dad trucking her to horse shows and her mum helping her out in the field for that extra hand as Aiva takes care of all her horses on her own.

About the Author: Ann Jamieson has wanted to be a horse show judge since she was a child, and has now held her USEF “”r”” judging cards for over 30 years. She writes about both horses and travel (and particularly likes to combine the two). Ann is the author of the “For the Love of the Horse” series, four volumes of amazing true stories about horses, and the proud mother of her grandson Secretariat, Fred Astaire (Tucker).
Read more from this author »