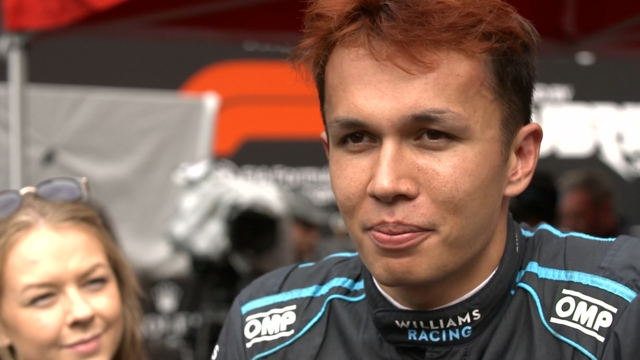 The Thai driver scored all three points for Williams this season, but when he went straight into Turn 1 and punctured the tire, it forced another pit stop just four laps after the first and put him out of the race.

He then reported “unexpected bounces” on the straights, with the team then opting to retire the car.

“It was a tough day and a bit poor performance from my side as well,” he said. “The conditions meant it was really difficult to brake in the right window, especially with all the variations that a drying track and red flags bring.

“The car felt good every time we had clean air, and I felt competitive at certain points, so there are positives to take away. Unfortunately towards the end of the race I had a problem with the car that forced me to retire. I think it’s probably a weekend to forget for us, but that’s how it goes sometimes. We’ll focus on the next one.

His teammate Nicholas Latifi was on the back foot when he hit the barrier early in the race, but he pushed on and eventually finished 15th.

“It was something strange,” Latifi said of the minor accident. “I have to understand what happened, because for me, I didn’t do anything wrong there. I mean I was braking then the car started accelerating again as I was turning it’s almost like the gas pedal wasn’t stuck but the gas pedal came back and it just started pushing in the barrier, so it was very, very strange. Without it, I don’t know exactly what would have happened.

ANALYSIS: Why Red Bull and Sergio Perez have extended their marriage until the end of 2024

“Obviously we were already detached from the back from the start. I had good pace on the middle tire to catch up, even running once into Turn 1. Then that last stint was tricky with the optional tires. The balance I had since the last one wasn’t where it needed to be and I was going to struggle with the graining. I was kind of surviving until the end .

“I managed to take two places from guys we were racing against, so there were positives there. It’s just a race like this, so chaotic, so many things going on, and just this beginning of an incident with the car, for whatever reason, it’s really frustrating, because again, we would have been more in sequence with everyone, and then you don’t know what could have happened then.

Williams and the rest of the teams will readjust their machines at their respective bases before traveling to Baku next week for the Azerbaijan Grand Prix.