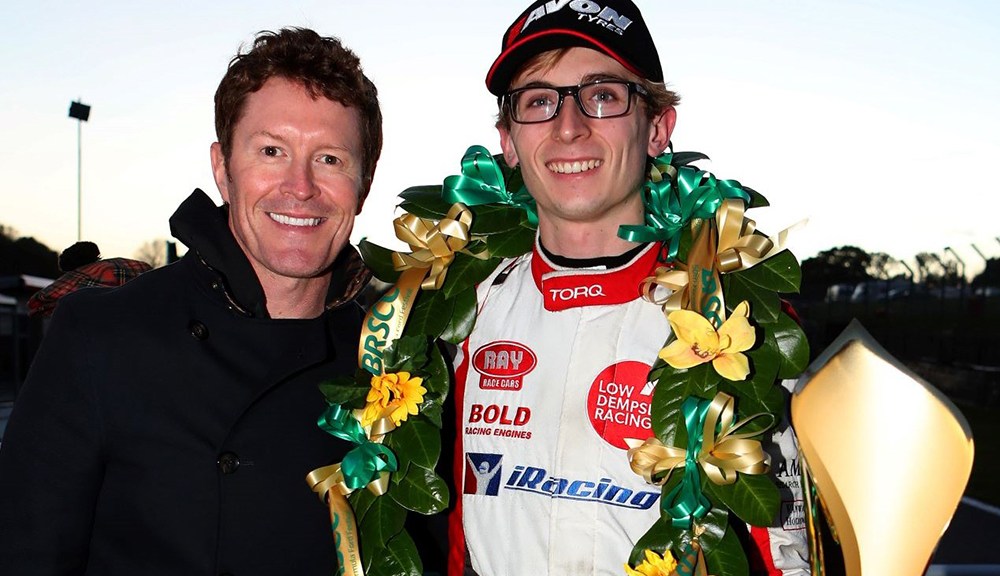 The 50th Formula Ford Festival came to a sensational end this afternoon with a thrilling 20-lap grand finale in which Team USA stock drivers Max Esterson and Andre Castro finished second and third behind England’s Jamie Sharp . It was the first time that two pilots from the American team had stepped on the podium, although Josef Newgarden won the Kent final in 2008 in the colors of the American team scholarship, and Brett Smrz and Neil Alberico took third place in 2009 and 2011, respectively.

Esterson (shown above right with Scott Dixon) provided one of the driving forces behind the event, moving from 13th on the grid to third at the checkered flag. Castro finished strong on Esterson’s tail after starting from eighth place. Both drivers took advantage later when Scotsman Neil Maclennan was disqualified for overtaking under a yellow flag in a frenzied final race.

As was the case for the Heat races yesterday, the capricious English weather was in full swing with heavy rain in the morning causing the start of the two semi-final races to be delayed by half an hour. Ironically, after a short period in which conditions improved markedly, the rain returned in force just as the 28 starters in today’s opening race ventured out for a pair of reconnaissance laps before forming. on the starting grid.

Castro placed sixth on the grid for the first semi-final in his Ray GR19. He lost a place in the first lap and, after an early interruption in the Safety Car, engaged in an intense battle for fourth place with Jonathan Browne who was settled in the last lap at Clearways, the last corner, when Castro dove into what had now become a trademark interior pass.

Esterson lined up in pole position for the second semi-final, which also took place in very wet conditions. Right away it became clear that the race would be a struggle for the young New Yorker as poor traction caused him to lose a place in the race to the first corner, Paddock Hill Bend. He slipped to seventh in the opening five laps and struggled hard in the closing stages of the 14-lap race to maintain that position ahead of his Low Dempsey Racing teammate – and 2010 Formula Ford Festival winner (and GT champion British 2021) – Dennis Lind of Denmark.

Foster and Murray duly lined up in the front row for the Grand Final, sponsored by Clapham North, when the track was almost completely dry. The action was hot and heavy from the start with Oliver White (Medina) and Tom Mills (Spectrum) also being part of the leading quartet being covered in thumbs. Esterson, meanwhile, was immediately on the move, climbing into the top 10 at the end of the second lap. An unfortunate wheel clash between Murray and White at the exit of the dreaded Paddock Hill Bend saw both drivers come out of the race, with Mills also involved. The safety car was scrambled while the track was clear, and soon after the restart Foster also made a mistake going off the road at Clearways. Subsequently, an 11-car serpent fought a spectacular battle for the top spots for the remaining 10 laps.

Esterson quickly moved up to third at the halfway point, putting in a series of excellent passes. He was briefly demoted by Chris Middlehurst (Van Diemen) before regaining the position with five laps remaining. Esterson remained glued to the two leaders, with Castro battling past Irishman Jordan Dempsey for fifth place in the 15th round. Middlehurst was also always on their heels. With one lap remaining, the first six cars were overlapped in less than a second. In the end, however, a jubilant Sharp held on to take the checkered flag less than a tenth of a second ahead of Maclennan. Esterson, Castro, Dempsey, Middlehurst, Northern Irishman Ivor McCullough, another former Festival winner, as well as convalescents Foster, Browne and Lind completed the top 10, all separated by just over two seconds.

â€œI’m delighted to have finished on the podium at the Festival, especially after starting 13th,â€ said Esterson. â€œI just kept my head down and moved forward with some wild moves in Clearways and Paddock. Thanks for everyone’s support this weekend and I hope we make it to the top next week at Silverstone!

â€œI can’t express what it means to be on the podium at my first Formula Ford Festival,â€ added Castro. â€œWe have been working on our speed all week and at race time we have gained places each time. We kept moving away from our grid in every race and persevered in the final after being 12th at one point. It’s amazing to have Max on the podium with me because he also had incredible driving. Next week’s Walter Hayes should be exciting and I can’t wait. Many thanks to the guys at Low Dempsey Racing and to all of Team USA’s partners for making this experience a success.

â€œWhat a fantastic weekend,â€ said Jeremy Shaw, Founder of Team USA Scholarship. â€œThe race was intense and it was so cool to see stars like Scott Dixon, six-time NTT IndyCar Series champion, and former F1 drivers Jonathan Palmer and Bruno Giacomelli in attendance for the post-race celebrations. All agreed that the quality of the competition was absolutely exceptional. It really was. It was also fun to see former F1 factory and longtime Corvette driver Jan Magnussen have such a good time – and finish 11th in the final – in another Low Dempsey Racing Ray. He is already preparing his return in 2022!

The two Team USA Scholarship drivers have several other online opportunities early this week before starting preparations for next weekend’s Walter Hayes Trophy event at Silverstone on Wednesday.