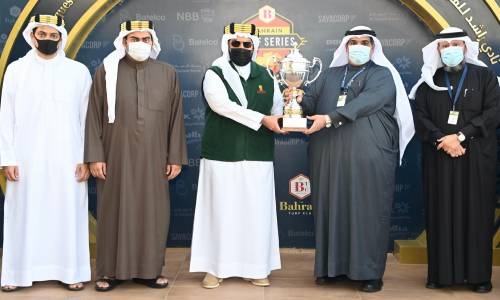 Cheer on Triumphs to Lift the Banagas Cup | THE DAILY TRIBUNE

Al Mohamediya Racing competitor Encourage won the Bahrain National Gas Company (Banagas) Cup in today’s featured race at the Rashid Equestrian and Horseracing Club (REHC) in Sakhir. Played over 12 stadiums with a purse of BD5,000, Encourage won the event for coach Hesham Al Haddad as he was saddled by Neil Callan, who scored an impressive hat-trick for the day.

Callan’s other wins yesterday came in two of five races offering a Bank of Bahrain and Kuwait (BBK) Cup. In race six, Callan led Chimgan to victory over seven furlongs to claim a BBK Cup and the lion’s share of the BD2,000 prize for Al Mohamediya Racing and Osama Hashim.

The race took place over eight stadiums with a purse of 2,000 BD. Madmin won this BBK Cup ahead of Never Enough, which finished second for Al Mallah Syndicate, Abduljaleel Al Mallah and Marvin Grandin, while Wild Hero finished third in competition for HBR Racing, Hareb Almalki and David Egan. The other three BBK Cups of the day were in the fifth, third and first races.

In the third race of the day, spanning nine stadiums with a BD2,000 prize, Parchment won the BBK Cup for Victorious, AM Smith and Edinson Rodriguez. Aslaan was second for Al Mallah Syndicate, Abduljaleel Al Mallah and Marvin Grandin, while Henry the Horse was third for M and E Racing, AM Smith and Julio Garcia.

The other BBK Cup in the first WAHO race was won by Kuheilan Al Adiyat 1813 over six furlongs with a prize of 2,000 BD. Victorious were the winning owners, while Yousif Taher was the trainer and Hasan Al Saffar the jockey.

They were competing for owners M and E Racing and trainer AM Smith. Nine Below Zero finished second for Al Afoo Raing, Mohammed Saeed and Marvin Grandin, while Koolasice finished third for Mark T Gittins, Ross O’Sullivan and Charles Bishop.

In the second race of the day, contested on a six furlong straight with a prize of BD 2,000, Dirab was the winner for Ras Rumman Syndicate, Taleb Ali and Ali Samir. Aldurah came second representing Al Afoo Racing, Mohammed Saeed and Hasan Al Saffar, while Kailash was third for Mohammed Yousif Sarhan, Yousif Sarhan and Abdulla Faisal.