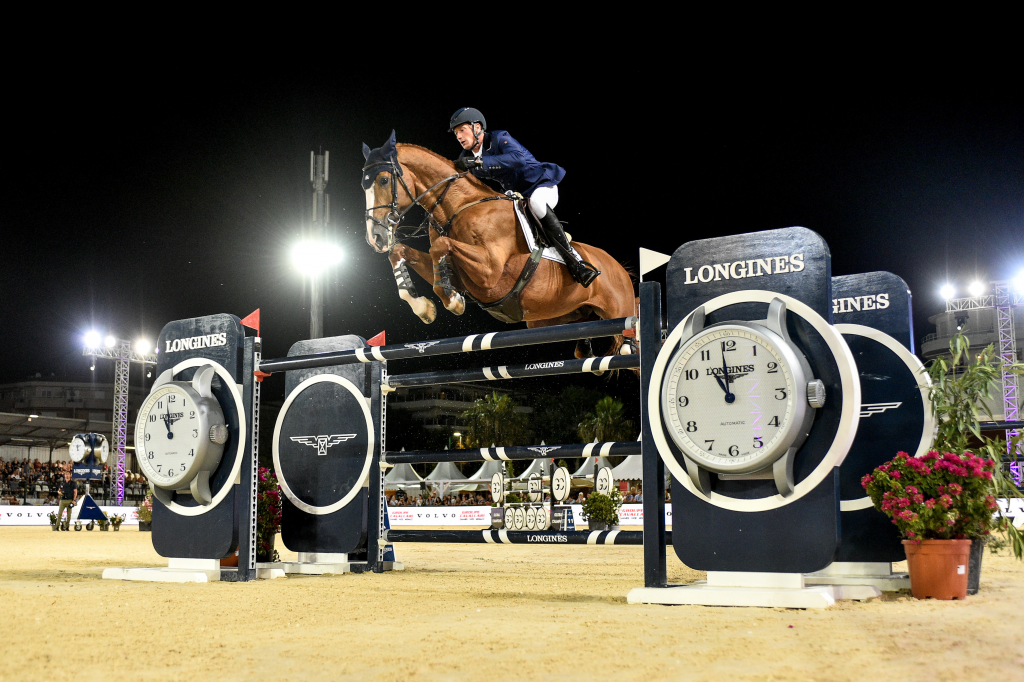 It was an explosive evening of high-level sport as Daniel Deusser and Bingo Ste Hermelle risked everything as the first to enter the play-off and triumphed in the dazzling Grand Prix of the Longines Global Champions Tour of Cannes presented by Volvo Groupe Cavallari .

Deusser reigned supreme at Cannes, winning a frenzied shoot-off against the show jumping heavyweights just 0.23 seconds clear of second-placed Spencer Smith and Theodore Manciais. Ben Maher and Faltic HB took the last step of the podium on the shores of the Mediterranean for the 7th stage of the Longines Global Champions Tour circuit.

Smiling and waving to the crowd, Deusser told GCTV: “I’m very very very happy with my little horse tonight. Starting first at the jump-off is never easy. I took all the risks until the last fence, it’s a great atmosphere here tonight and a great shoot-off but of course I wanted to be number 1. Bingo really fights for me and wants to win in the ring.

Deusser’s win means he is the last to earn a coveted spot at the Longines Global Champions Tour Super Grand Prix later this year. He said: “Prague is a goal for every runner here. The sooner you qualify the better and I’m happy and lucky to have done so today.

François Bourey – President of the Jumping International de Cannes declared: “A successful comeback! We were full that evening, which proves that the jumping was really expected. Next year will be the 40th edition of the competition and we are determined to make it a big celebration. It will be a special moment. We started talking about it with Jan Tops tonight and we have some great projects to work on in the coming months. First of all, I would like to thank the city and Mr. David Lisnard, Mayor of Cannes, who has always supported the competition and ensures that Jumping takes place in optimal conditions. I approached this 39th edition as if I were organizing my first international and I felt the same emotions as when I started, which is absolutely wonderful. The organizing team, the public, the volunteers, the atmosphere, the sponsors present, everything was great. See you in 2023!”

Tonight’s showdown also had a big impact on the overall standings for the season. Christian Ahlmann extends his lead to 148 points while Pieter Devos remains second with 139 points. Niels Bruynseels is only 3 points ahead of Ben Maher with 124 and 121 points respectively.

It was a rollercoaster start to the LGCT Grand Prix of Cannes as course designer Uliano Vezzani’s difficult first lap track caused multiple faults and retirements from a string of top riders. Under the spotlight and in hot temperatures on the French Riviera, other major players came out of the 1.60m class, leaving only 6 to qualify for the play-off.

It was a packed house at the Cannes exhibition center and excitement mounted as the crowd went wild when first to enter the barrage Daniel Deusser and Bingo Ste Hermelle entered the sand arena. The atmosphere was electric as the best combination soared to the first fence, but it was his full-throttle gallop to the final fence where he risked it all in 34.62 seconds that put the pressure on the rest of the field world class.

The race was on as Max Kühner completed another double clear, even taking a stride less than Deusser in the front row, but he couldn’t keep up the pace stopping the clock in 37.40. The temperature soared as home hero Kevin Staut and youngest of the peloton Dialou Blue PS exploded on the shortest course, but with two tries ending their chances of a home win.

Still looking for his ticket to the LGCT Super Grand Prix, Ben Maher was more determined than ever to claim victory in Cannes. Taking one stride less than Deusser in the front and penultimate rows, Maher shook his head in disappointment as he stopped the clock slower than Deusser at 35.68 seconds.

The bar was high but Spencer Smith and Theodore Manciais were not intimidated. Making good use of Theodore’s long stride, the American star bought time between the fences, but extra control until the final fence saw him cross the finish line fractions of a second behind his team mate. Deusser stable in 34.90.

Last to go, Fernando Martinez Sommer and High Five gave their best, but they were a second behind the time to beat at halfway and a costly rail put them on four faults, off the podium and giving the victory to the German tonight.

The Longines Global Champions Tour now heads to Stockholm from June 17-19 for the eighth stage of the spectacular championship race.

Michael Andretti eyes ‘legitimate’ path to Formula 1 for US drivers