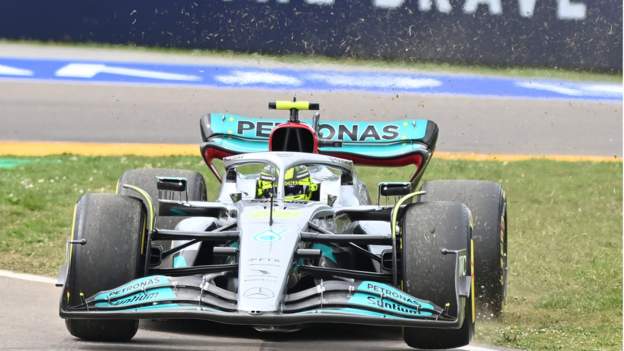 Lewis Hamilton squandered his chances of winning this year’s world championship after a disheartening performance by his Mercedes team in the Emilia-Romagna Grand Prix sprint race.

The seven-time champion finished 14th, falling one place from his qualifying position, while teammate George Russell finished 11th, returning to where he started after also losing ground at the start.

The 2022 season was already shaping up to be a tough one for Mercedes after the first three races in which they were nearly a second off the pace of the leading cars Ferrari and Red Bull.

But Imola, as team principal Toto Wolff admitted, “scores the lowest” of the year so far.

“We stick together,” Hamilton said. “We try to motivate everyone. This is the situation we are facing.

“Obviously we’re not fighting for the championship. But we’re fighting to understand the car and improve and improve throughout the year. That’s all we can hope for at the moment.”

There may still be 20 races to go, but Hamilton said he had to be “realistic” about Mercedes’ position.

Why couldn’t they catch up?

The bottom half of the field is not where the Mercedes car sits on raw performance – it remains third fastest in the field.

But after a tough qualifying session in which the team was compromised by weather and circumstances, they lacked enough pace advantage to overtake the cars ahead.

Both drivers managed to overtake an Aston Martin – that of Russell Sebastian Vettel and that of Hamilton Lance Stroll – but they were the slowest cars on the field. And Russell spent the race behind Mick Schumacher’s Haas; Hamilton behind Yuki Tsunoda’s Alpha Tauri. It’s definitely not the company they expected to be familiar with before the start of this season.

Mercedes had to reset their expectations very quickly, an experience Wolff called “humiliating”.

“A lot of work is done in the background,” Hamilton said, “but that’s what it is; that’s what we have. At the end of the day, we haven’t been successful this year, but everyone is working as hard as they can to fix it.”

The worry for Mercedes at the moment is that even though they know what’s wrong with the car – too much drag, not enough grip and terrible aerodynamic bouncing on the straights – they don’t know how to fix it.

“We have a direction to unlock the car’s potential to get us a lot closer but at the moment we don’t have the key,” Wolff said. “So we just need to step back and rely on science and physics before we get into some kind of negative momentum, which we’re not.”

According to Mercedes, the fundamental problem is bouncing or porpoising, a problem that most teams have to one degree or another, but which affects Mercedes more than most.

This is because the airflow under the car is disrupted and “stalled” as the car lowers as speed increases on the straights. This causes a loss of downforce, which then returns when the car lifts, before the problem reoccurs.

Is the concept car at fault?

Why is this such a problem for Mercedes? Engineers outside the team, both those with previous experience of late 1970s and early 1980s ground effect cars, and those on rival teams now, believe the cause is the floor of the car.

Any flex in the floor of a car of this design can be very disruptive, and the Mercedes has a very different design philosophy to that of Ferrari and Red Bull, with vast exposed floor areas.

It’s a continuation of a philosophy that Mercedes have followed with great success in recent years, and great efforts have been made to take it to the extreme this season. The result was a car with virtually no sidepods – bodywork next to the driver.

This should reduce drag and improve aerodynamics. But that appears to have caused issues with floor stiffness – something of crucial importance under new rules introduced this year, which have dramatically increased the proportion of overall downforce created under the car.

Mercedes now admits they fear the car’s unusual concept may be the cause of the problem.

“It’s a valid point,” Wolff said. “All good and bad happens mostly on the ground and we have some interesting ideas and concepts that we are exploring that need to find their way into the car in future races.

“I wouldn’t say any concept is wrong. But is there any part of what we’ve done that just doesn’t work with the regulations, and what is it?

“You don’t need to throw away the good, but if there are fundamental areas that don’t allow us to unlock the potential that we think is in the car, then you need to cut your losses.”

Hamilton said: “All questions are reasonable. I can’t say if the concept is faulty, I’m not an aerodynamicist. At some point we will better understand if it is or not.

“Maybe all of a sudden we’ll fix the rebound and unlock more potential. It’s hard to undo it. Hopefully it will come to light soon and then we can start focusing on the solution. because we haven’t found a solution yet.”

To abandon this conception, however, would mean admitting that all of their research before this year was flawed – and would raise broader and deeper questions.

“That would mean you saying, ‘Where’s the baseline now? ‘” Wolff said. “Is there a new area where we think we can unlock more potential?

“(But) if we thought that, we would have done it five months ago. We thought that was the line of development we needed to follow. So it’s quite a tricky exercise.

“You can only cut losses next year if you understand where we went wrong, because right now we just aren’t doing it. Not yet.”

How is Hamilton doing?

In his post-qualifying press conference, Hamilton ironically reminded the media of a comment he made before the season, before the car ran.

It was a public admission that pride is a dangerous trait for anyone to fall into, even a seven-time world champion.

Mercedes’ spell has thrown Hamilton back into a situation he hasn’t been familiar with for over a decade.

Not since 2009 has he driven such an uncompetitive car – and back then he was a hungry ex-world champion with so much more to achieve. Today he is the most successful driver in the history of the sport and will turn 38 next year.

But he says his determination to fight back and get back to being competitive hasn’t waned.

And he dismissed suggestions that he might not want to continue in this scenario as “stupid and a bunch of nonsense” from “individuals I respected when I was younger (in) the goal to make the headlines to stay relevant”.

“I’m 100% committed to this team,” Hamilton said. “There’s nowhere else I want to be, just because we’ve been through a tough time, it’s not in my DNA to back down. We can fix this. It’s going to be a painful year that we have to go through go out together.

“We just have to work hard to make sure we’re not in that position next year.”