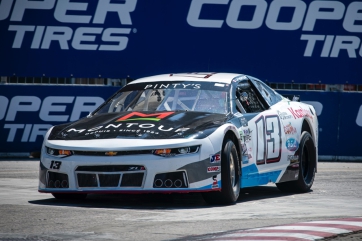 Louis-Philippe Montour ran his very first race on the streets of Toronto yesterday, where the first NASCAR Pinty’s street race of the season took place.

A popular event for drivers as the 2.8 km urban layout attracts a friendly and enthusiastic crowd of racing enthusiasts. The event always takes place on IndyCar weekends and sometimes steals the show with its intensity. This year was no exception as the NASCAR Pinty’s Series staged an action-packed event that involved virtually every racer for fans gathered around Exhibition Place and along Lakeshore Boulevard. For Louis-Philippe Montour, driver of the #13 Kamloops | GL electricity-automation car prepared by Dumoulin Compétition, it was a new opportunity to show his qualities as a driver.

Montour finished the combined practice and qualifying session in 6th position: “I was very happy with our practice and qualifying session,” he said. “We were able to test some settings on the #13 Kamloops | GL electricity-automation because, thanks to the many caveats during the mixed session. We finally took advantage of the last four laps at the end of the session to set our best time with the 6th time on the grid for the afternoon race.

Montour drove brilliantly, learning the track quickly and easily: “It’s a very fast track with long straights,” he explained. “You have to brake very hard on the bumpy surface and that disrupts the set-up of the car.”

The event proved to be as eventful as the previous morning’s practice session, especially with the competitor of the #92 car, with whom Montour battled for several laps without giving up his position. “There were several periods of caution and restarts which led to some great battles. I’m very proud of my 8th place finish considering how competitive the action is on track.”

“I would also like to thank Dumoulin Compétition who did an excellent job on my car and allowed me to be fast.”

Louis-Philippe Montour’s next meeting will take place in a little less than a month, when he will return to the legendary track of the Trois-Rivières Grand Prix.

Dumoulin Compétition can count on the support of Kamloop to keep the team healthy throughout the season.

In addition to the on-track partnership, Louis-Philippe Montour and Dumoulin Compétition also work together on team logistics. In fact, Kamloop products will allow the team to optimize food-related processes and deliver even fresher food at events. You can read the full article here.