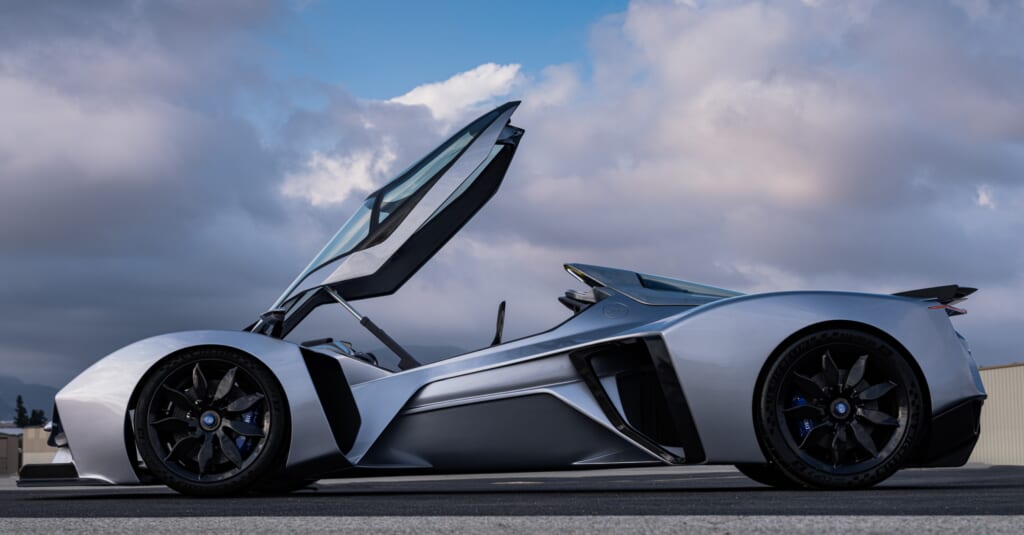 Combining a naturally aspirated V12 with an electric motor and F1 suspension, the Delage D12 seeks to break the world record for the lap around the Nürburgring.

In 1874, Pierre Louis Adolphe Delage was born in the verdant countryside of Cognac, France. Among some of the most beautiful vineyards in the world, the watchmaker’s son studied science, graduating from the neighboring Ecole des Arts et Métiers with an engineering degree. After obtaining financial support in 1905, he founded Delage, which would enjoy great fame in the world of motorsport.

With a fleet of hand-built, V12-powered racers, Delage won Grand Prix crowns and world speed records, culminating in 1927 when his Type 15 S 8 crossed four Grand Prix checkered flags. Europe, winning its eponymous nameplate the World Championship and the Legion. of Honor for his driver Robert Benoist.

Unfortunately, the good years of Delage will be short-lived. Despite building some of the most luxurious and expensive cars the world has ever seen, the Great Depression and World War II knockout combo conspired to kill the brand. In the early 1950s, after being sold to Gallic peers Delahaye, Delage went black.

“Because I am French, Delage was really obvious,” explains Laurent Tapie from his headquarters in Magny-Cours. A serial entrepreneur, son of businessman and politician Bernard Tapie – best known for reviving the moribund Adidas label in the early 1990s and owning Champions League-winning Marseille football club – took on the task of resurrecting the legendary brand.

“The only two brands in the history of France which have been world champions in Grand Prix are Bugatti and Delage, no one else”, he recalls. “Delage set several world speed records and, in the first half of the 20th century, won more elegance prizes than any other brand in the world.

“Nobody remembers that France was the number one country for luxury cars until the Second World War,” he continues with a hint of exasperation. “We sold more prestigious cars than the English, the Germans, the Italians. We were number one!”

Talking with Tapie for just 20 minutes, it quickly becomes clear that his aim is not just to bring his nameplate back to the top of world motoring, but also the French flag. “Delage remains one of the most prestigious brands in history,” he insists, “we just need to relive that past and remind people of it.”

Fortunately for Tapie, the vehicle he wants to spearhead this Gallic resurgence, his Delage D12, has all the ammunition needed to lead the charge. First, the heavy artillery: powered by a gargantuan 7.6-litre 12-cylinder engine developed entirely in-house, the naturally aspirated block’s 990hp is mated to a 110hp electric motor to create asphalt-melting of 1100 hp.

Obviously, engine development is an expensive and time-consuming undertaking. But Tapie decided to design a big block to avoid bolting on turbos or superchargers. “For me, the golden years of Formula 1 were the years when you had the naturally aspirated V12 and that unique sound they had – I’m a bit nostalgic for that period,” he explains.

“Personally I feel like about 50% of driving pleasure is sound, and if that’s spoiled by the whine of a turbo or supercharger, well that’s a real shame.”

The second singular aspect is its nimble feet: the D12 sports a very expensive and rare F1-style pushrod suspension, a system that revolutionized Formula 1 two decades ago, but is still so cost prohibitive that no other hypercar uses one. And even if they had the means, French engineer Mauro Biancchi, who holds the patent, granted Delage the exclusive rights for road-legal cars.

“No one else has it on a street legal car, so it was one of the cool things I wanted the D12 to have,” Tapie boasts. Finally, there is the most striking innovation of the D12: a central seating position. Its twin seats are positioned one behind the other, a fighter jet geometry that offers unparalleled balance and vision, separating the hypercar from just about anything but perhaps McLaren’s legendary F1.

Asked about the origins of his motorsport obsession, Tapie is quick to share: “The emotion has been there since I was a boy,” he reveals, “because I’m really into cars. ” The way he sees him racing since he was 20 years old gives the CEO a big advantage, thanks in large part to his knowledge of the competition.

Although he was a lifelong fan of Porsche, Ferrari, Lamborghini, McLaren, Aston Martin, etc., Tapie knew none really appealed to him, at least not as a visionary and entrepreneur. He credits (blame?) the stratospheric standards he set for Delage by winning an amateur race hosted by Porsche in 1996 where the top prize was driving a real Formula 1 car.

“It was one of the best experiences I’ve had in my life,” he recalls wistfully, “and nothing I’ve ever driven since, even the very recent 700 or 800 horsepower supercars , can only approach the feeling when I drove it.

Noticeably excited by the memory, he continues. “The desire to create a kind of road-legal Formula 1 car was born on that day, [though] Honestly, I would never have thought of building one. After a pause, he adds: “If you’ve ever driven a car from the center position, you never want to go back to one side of the car. I think the D12 will be the closest thing to a road-legal Formula 1 car. »

Since the conception of the D12, its success has been based on a single objective: to set the world record for the lap around the Nurburgring. As arguably the most coveted accolade in the automotive landscape, the Nürburgring Nordschleife break-in holistically challenges a vehicle in a way that no other metric can.

Breaking that record would be definitive proof for Tapie that his D12 is worthy not only of Delage’s name but also of his rugged heritage, and perhaps most of all to shake the Tricolor flag.

“I am extremely confident that we will beat [the record]he declares without hesitation, “and we will beat him by several seconds, not just one or two.

This supreme confidence is based on some of the most fundamental principles of motorsport. Highlighting that the D12 has more power than the current (Mercedes-AMG GT Black Series) and previous (Lamborghini Aventador SVJ) record holder, it is also lighter than both, the main combo for racing superiority.

Now add the unique pushrod suspension and the fact that the hybrid hypercar has more than double the downforce of its competitors.

It’s clear that the Frenchman seems to think he has all the necessary elements to turn this goal into reality. But raw materials will not be enough; To prepare the D12 for this ultimate test, the final stage in the development of the $2.3 million hybrid hypercar will be to hand over the keys to famed F1 champion Jacques Villeneuve.

Quite simply because Tapie believes that only a world-class pilot – not an engineer – can orchestrate and balance all of these parameters in a single symphonic ensemble.

Tapie learned that lesson from a vehicle he says is the best streetcar he’s ever driven: the Ferrari F430 Scuderia. Famed Formula 1 GOAT (all due respect to Lewis Hamilton) Michael Schumacher dialed in the balance of this super machine, and Tapie thinks the difference between a driver-led setup and an engineer-led setup is the because of the epiphany of the F430 Scuderia.

“It’s very difficult to explain but the Scuderia is a living car. You take a ride with it and end up with a smile on your face; you feel like the car and you are one,” he exclaims. “I’ve never felt that in any other car, and that’s what I expect from the D12.”

As the third driver (after legends Mario Andretti and Emerson Fittipaldi) in motorsport history to win a Formula 1 World Championship, the Indianapolis 500 and the CART/IndyCar Championship, Villeneuve is the only man who, according to Tapie, can do the job.

“Jacques has a very great knowledge and a very good feeling with cars”, he thinks. “One of the reasons he was world champion and was able to beat Michael Schumacher is that he has this strategy: he knows how to get the most out of his car and how to make sure that he and the car don’t do one.

So that’s what I want him to do with the Delage. I’ll be happy once he gets out of the D12 and says, Now it looks like a Formula 1 car.”

Last August, the D12 finally made its American debut at Monterey Car Week, and as expected, the otherworldly hypercar left many potential customers in awe.

“We received a lot more people than expected, with an incredible enthusiasm for the design. Many visitors told us that the D12 was the most beautiful car presented this year,” shares Tapie happily. “I was delighted to hear visitors say ‘I didn’t know Delage but a friend saw your car and told me that I had come to your stand.

The fully functional D12 prototype will be shown early this year, with customers in Europe testing the car first, followed by America. As orders are confirmed, the D12s will be configured in the spring with first deliveries scheduled for the first quarter of 2023.