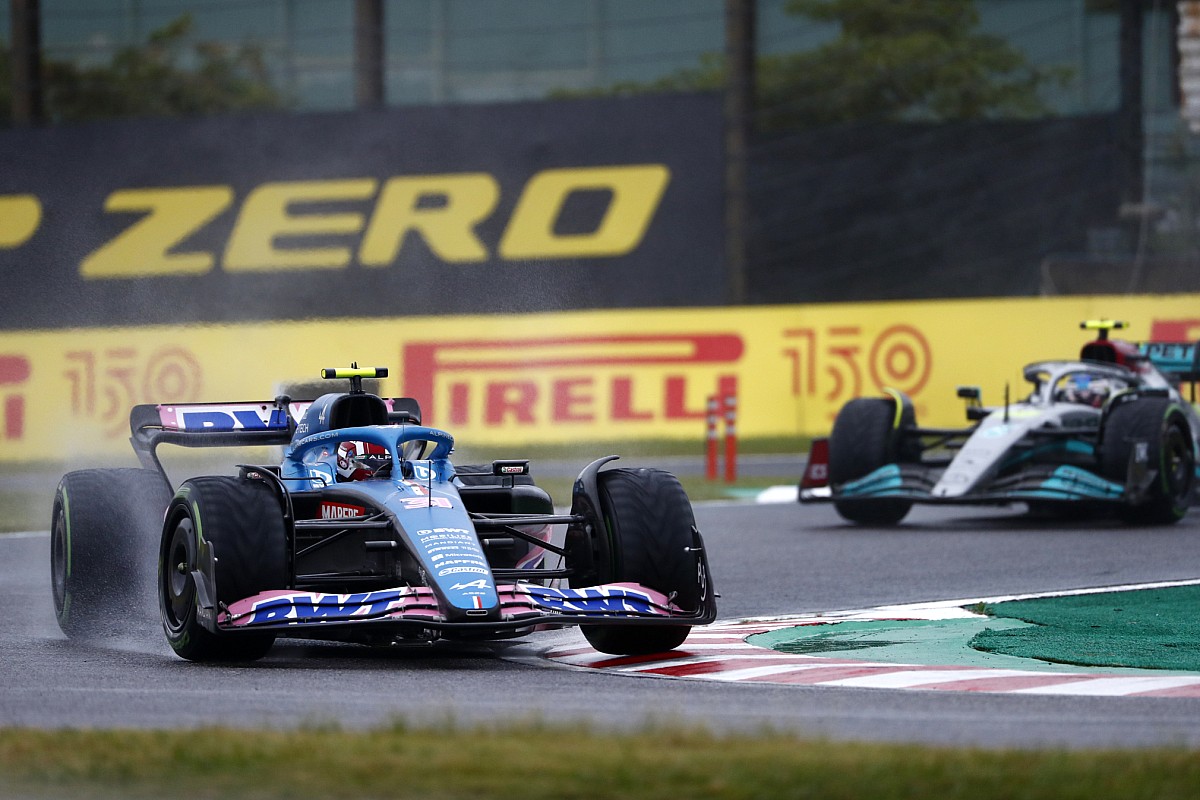 Hamilton ‘had a lot of fun’ in wet Suzuka F1 race, ‘most fun’ Ocon battle

Hamilton spent much of the race chasing the Frenchman, attempting a number of moves at the hairpin, out of Spoon and into the first corner – but couldn’t find a way out and eventually crossed the line just 0.641 seconds behind in sixth.

The seven-time world champion knew before the race that a straight-line speed disadvantage would be a handicap in the race, while the wet conditions meant there was no DRS to provide an advantage.

Despite losing to the Alpine rider, Hamilton said he enjoyed the race and the challenge provided by the conditions.

“I had a lot of fun,” when asked about the battle with Ocon. “He did a great job of staying on track and staying ahead, obviously he was very, very quick on the straights.

“I was trying everything, but I think we had a lot of fun. I don’t know how the others had it.

Although unable to pass Ocon, Hamilton felt satisfied with his race and felt he had gotten the most out of the car with its straight-line speed disadvantage.

He added that getting started in wet conditions was “what motor racing is”, especially as Japanese fans had waited three years for an F1 race at Suzuka.

“I don’t feel frustrated because it was a sprint race. I did my best and I’m happy that we at least scored points today. We were so slow on the straights. closer, as close as possible.

“You could probably see it on TV, as soon as I pulled out they just walked away. I wish it was a longer race.

“I’m glad we did a few laps for the fans here. Although it’s not really a huge race for them considering how long they’ve been waiting.

“I think it was awesome. I mean, that’s motor racing. I had a blast. It was so hard, so hard to see.”

“I think the reboot we had at the end, I think it was perfect timing, and I just wish we could have stayed in the dark longer. We lost a bit of light.”

Regarding the conditions at the first start before the red flag, he said: “It looks like there may be more spray this year with these cars. And I think we probably all should have started with extreme rain. But when we did the grid laps, it was inters.

“I guess it just started to rain a bit more. But I think if we had all started with extremes we would have continued, and it would have been fine. It was really difficult with the visibility, but it was great at the same time.

Hamilton remains hopeful Mercedes can progress in 2023 after a difficult season with the W13.

“I think for us we know what the issues are with this car. I think as a team we haven’t gone from world champions to not being able to build a good car.

“I have no doubt that we will have a better car next year. Whether or not we’ve fixed all the issues we’ve had this year, we’ll find out when we get there.”

Alberto Ascari: the best double world champion we have ever seen?