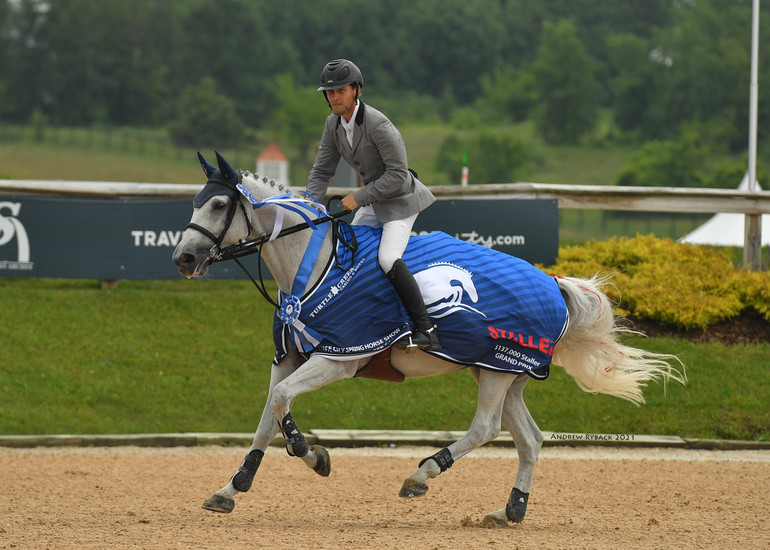 The conclusion of the three-week Traverse City Spring Horse Show series, presented by Turtle Creek Casino & Hotel, highlighted the $ 137,000 Staller CSI3 * Grand Prix on Sunday afternoon. Each of the 28 international horse-athlete pairs were eager to end the third week leading the gallop to victory. In the end, it was the American Karl Cook who beat an eight-horse jump-off to take top honors aboard the Caillou 24 of Signe Ostby (Casall x San Patrignano Corrado).

Portugal’s Bernardo Costa Cabral designed a 13-effort first-round track with tact to test athletes and their horses’ agility and control throughout the course. The tight time of 85 seconds proved to be a challenge, as three athletes missed out for the jump-off on a single lapse of time. At the end of the first round, only eight combinations found their way to a clear course, including Ben Asselin (CAN), Camilo Rueda (COL), Luis Sabino Goncalves (POR), Cook (USA), Tanimara Maria Macari Carrillo (MEX), Lisa Carlsen (CAN), John Perez Bohm (COL) and Victoria Colvin (USA).

Returning to the Turtle Creek Casino & Hotel International Ring for the jump-off, Luikan Q (Luidam x Kannan) of Asselin and Attache Stables LTD made their way as scouts for the first double clear, stopping the clock in 36.13 seconds. His lead was short-lived, as Rueda slipped into the lead aboard Indus Van Het Keysereyck (Carabas van de Wateringhoeve x Nabab de Reve) after achieving a quick clear double and being groomed in 34.16 seconds . Sabino Gonçalves tried to knock down Rueda, but had an unfortunate rail on the way to finish in 35.87 seconds.

Entering the arena with confidence after a clear fourth place finish in the $ 36,600 Welcome Stake CSI3 * on Friday afternoon, Cook and Caillou 24 were determined to fight their way to victory. Taking advantage of the massive stride of the 14-year-old Holsteiner gelding, Cook was able to leave strides throughout the shortened 8-fence dam, leaving all rails intact and scoring 33.93 seconds on the clock to take first place. position. Although those who followed Cook would try, they couldn’t match their efficient conduct, ultimately earning him the top spot honors. After a good start at the jump-off, Rueda and his own Indus Van Het Keyseryck finished the class in second place, with Perez Bohm completing the top three aboard his own Voodoo 10 (Valentino x unknown).

On his victory:
” Pebble [24] didn’t show up last week so we could just chill out and relax but also get ready. Every previous day was trying to prepare for today. We jumped twice without fail two days ago [in the $36,600 Welcome Stake CSI3*], but the goal two days ago was just to have one or more good laps for today. It worked, he felt great today and I’m just super happy.

In the first round:
“It started raining immediately when I entered the ring which I liked quite well because the haze is really zero because it gets in your eyes, but the rain is falling so it doesn’t really come in. in your eyes. [Caillou 24] was sticky enough to close one but after that he started to settle in a bit and just growled and after closing one he felt great. The course was good. There were a few clear ones in the first half, then there was none for a little while. I thought the course was the right amount harder than two days ago [in the $36,600 Welcome Stake CSI3*]. Two days ago there was a lot of clear stuff, and I think it was right to make the course harder and I think the course was fair for the people that were there and the numbers that were there.

On Caillou 24:
“He was good, he felt really good, other than the fence where he was a little scary, the rest he felt impatient and we were able to follow the plan that we followed and hoped for. Much of it arrives at a particular gallop and simply stays there. He has a big stride so I can’t come and fly willy-nilly, everything needs to be better prepared because you can get in the wrong lane quite easily because of his stride. He went very calmly, and every fence I had to hit him in a certain way, he did. He felt right there with me which as a pilot feels really good.

At the dam:
“I took one less stride of fencing one to two, but then I paid a little for fencing three. I couldn’t get out of the turn as I wanted so I had to take six strides from the obstacle three to four, where Camilo [Rueda] takes five steps. I landed after fence four and went over there, and hit that red vertical in the middle. I think I took a step there too. After that red vertical the suit was a bit stable, then until the last fence I saw one less than we were walking but the angle wouldn’t have been great. I pulled for eight strides to the last fence and thought to myself, “The reason I’m slower is that. But at the same time, it was the right decision. Even though I was slower, it was the right decision.

On horse shows in Traverse City:
“I have never been here before, this is my first time here. Obviously the weather is not great this week, but the layout of the park is really nice, jogging holds the rain very well, as we saw this week. I think it got better with the rain, which is not normally the case. It feels good and it drives very well.

Ross Brawn Column – On Red Bull’s momentum, frustration for Russell, and where Mercedes goes from here