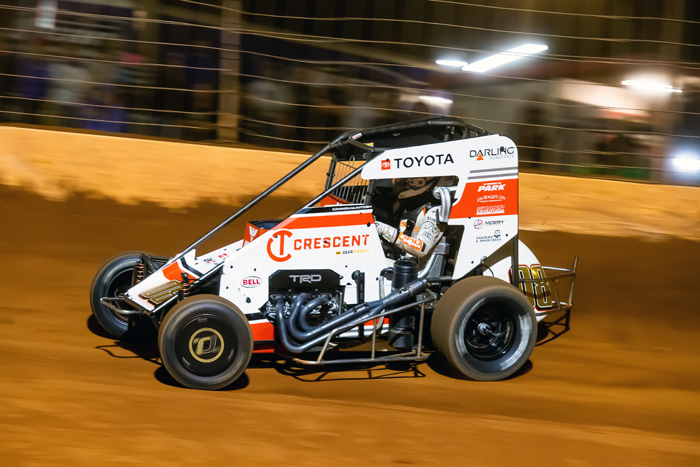 No one could top the 19-year-old in winning the $5,000 prize. McIntosh took pole position with a 33-point performance in the heat race. Bryant Wiedeman was outside of pole position.

“I didn’t know how behind me they were, but I knew there was nowhere I could go,” McIntosh said. “I was trying to sit on the bumpers for as long as possible until I knew I had to move in traffic. As soon as I saw a lane open I knew I had to take it I was a bit unsure how things would end once those sliders started but obviously Boschele got upside down I think he was driving so hard, whereas I was just trying to keep my pace and not overdo it.

Taylor Reimer, also of Bixby, Oklahoma, brought home a second effort. With her second place, she equaled the best result ever achieved by a woman in the history of National Midget races.

“It means a lot,” Reimer said. “I’ve been working hard the past few months and I’m finally done with school, so I can prioritize racing now. I want it badly. I know it’s gonna happen soon, I’m gonna win a Midget race soon. It’s just gonna take time. It’s so hard to jump here against these guys at such a competitive level, but I’m a competitive person and I’m up for the challenge.

Leaving Millbridge as Xtreme Outlaw Midget Series championship leader is Zach Daum, who claimed a third-place finish on Wednesday to become the only driver to finish on the podium at both shows. Teammate Ethan Mitchell followed him in fourth and Bryant Wiedeman rounded out the top five.

Kyle Larson, who first drove from 11th to sixth before dropping out on lap 11 and then dropped from 19th to third after the restart, offered a final bit of late-race drama.