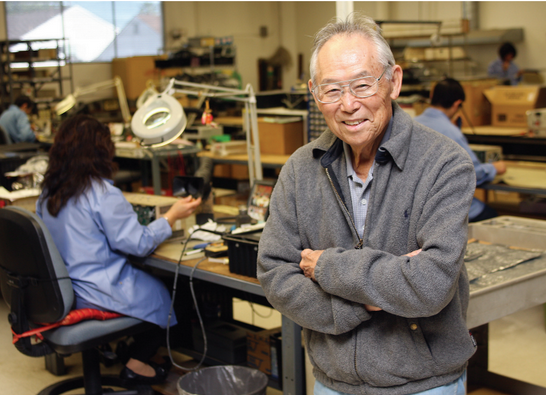 The Nisei Week Foundation is proud to hold its 80th summer event with free cultural activities for all ages. Japan’s Nisei Week festival features a grand parade as part of its first weekend of events, which will take to the streets of Little Tokyo on Sunday, August 14 from 4 p.m.

Marshals will be honored at the Nisei Week Awards Dinner on Monday, August 15. For more information, visit http://niseiweek.org.

Sugimoto was born in Parlier, Fresno County, in June 1926. Living in the San Joaquin Valley in the 1920s and 1930s was a difficult life for the family, which had nine dependent children. His parents worked as day laborers in farming communities to make ends meet.

Sugimoto discovered an interest in aviation at a very young age. This passion motivated him to get into avionics electronics. He completed a year at Fowler High School before Executive Order 9066 incarcerated the family at the Gila Relocation Center in Arizona.

An older brother was drafted and served with the 442nd Regimental Combat Team. Sugimoto was recruited after answering “yes, yes” to two loyalty questions and entered military service in March 1945. After completing his basic training at Camp Fannin in Texas, he was sent to Korea in August 1945 to serve in the occupying forces of the 6th Army. After his honorable discharge, he returned to California.

In 1947, he attended the American Institute of Television Technology in Chicago. In 1950, he obtained his bachelor’s degree in electrical engineering. Later, Sugimoto completed his flight instruction and became an instrument pilot. His passion for aviation came to fruition through command of a Piper Turbo Aero aircraft for 30 years.

Sugimoto married Ruri Hirano in September 1951 in Fresno and shortly after their marriage moved to Pasadena. He earned his professional electrical engineer license for the State of California and started his career as an electrical engineer and at some point was elevated to chief engineer. Realizing that working for others limited his creative and financial opportunities, he started his own business.

Sugimoto’s home and garage in Pasadena were the beginnings of avionics component design and manufacturing. KGS Electronics has been in business for over 62 years and now has a 50,000 square foot space in Arcadia and a facility in Upland. KGS supplies civil aviation, general aviation and military products to original equipment manufacturer (OEM) customers worldwide. Cessna Aircraft, EADS Airbus, Boeing Aerospace, Learjet Inc. and Robinson Helicopter are just some of the many aviation and aerospace companies served by KGS.

The Sugimotos have two children, Lisa and Nathan. Lisa retired after spending 35 years at community colleges in California. She is married to Don Nose and they are parents to Garrett. Nathan is president and chief financial officer of KGS Electronics. He and his wife, Christine, have three children, Lindsay, Alyssa and Aaron.

Lisa, Nathan and their families admire their father and grandfather’s resilience, courage, entrepreneurial spirit, and his enduring love and unwavering support for family and community.

They made history by becoming the first figure skaters of Asian descent to win medals at the Olympic Games in ice dancing. In PyeongChang, they also became the first fraternal ice dance team to win two Olympic medals.

The ‘Shib Sibs’ made their debut as authors in 2020 with the release of ‘Kudo Kids: The Mystery of the Masked Medalist’. The second book in their mid-level series, ‘Kudo Kids: The Mystery in Manhattan’, is out in 2021. Their next literary project will be a picture book – the planned release of ‘Amazing: Asian Americans and Pacific Islanders Who Inspire Us Everything” is spring 2023.

They were named US State Department Sports Envoys in 2017. Since then, they have traveled throughout Asia connecting with young people at goodwill events. They are also athlete ambassadors for the worldwide organization Right to Play. In 2021, Alex was appointed to the LA28 Athletes Commission.

Acosta is known for his fashion sense and would likely be voted “best dressed” in the entire league. He is part Japanese and recently had an amazing experience visiting the National Japanese American Museum in Los Angeles with his Japanese-born father and grandmother. When he’s not on the court, he’s busy fathering a curious and energetic toddler, getting involved in the local community, buying new kicks, discovering a new wine, or explore Los Angeles. You can even find him at the nearest cafe enjoying a latte.

The 2022 Nisei Week Japanese Festival is a nine-day event first held in 1934 and is recognized today as one of the oldest ethnic festivals in the United States. This event will take place in the Little Tokyo neighborhood of Los Angeles from August 13-21. . For a calendar of events, log on to www.NiseiWeek.org, call the Nisei Week Foundation office at (213) 687-7193, or email [email protected] Nisei Week’s office is located at JACCC, 244 S. San Pedro St., Suite 303, Los Angeles, CA 90012.