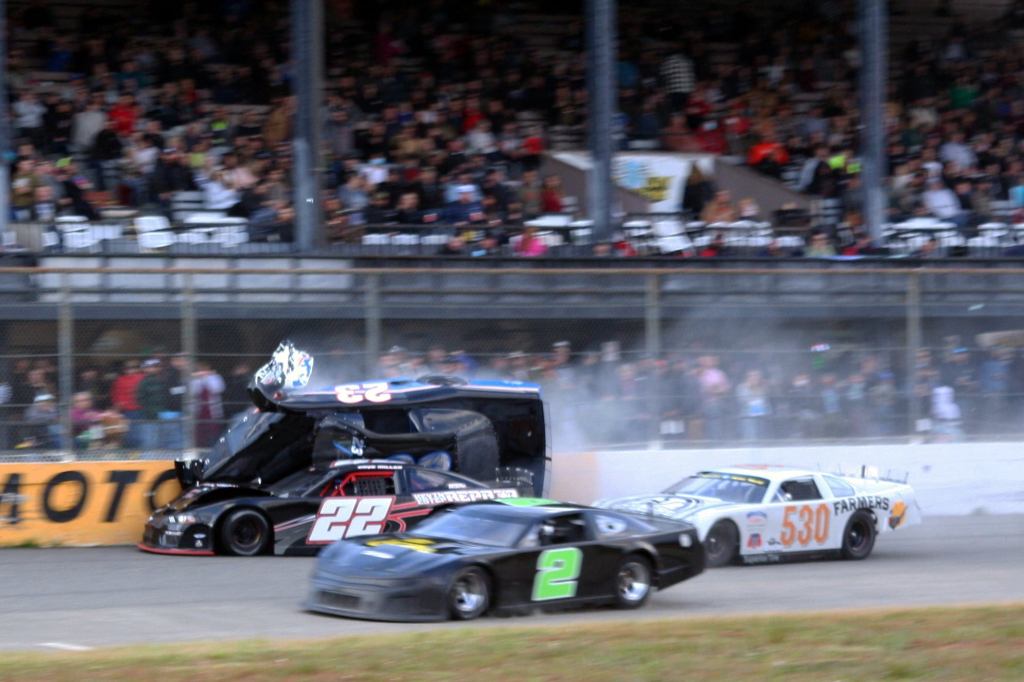 Dane Nissen capitalized on a few delays slowing second-closest David Henderson to extend his lead in the final laps and win the Late Model Rhododendron 100 class race at Redwood Acres Raceway on Saturday.

The “Rhody 100” attracted a lot of attention before the racetrack opened, with promises of big payouts of up to a total of $9,500 for any driver able to complete all three segments first, with a additional bonus of $2,500 for taking the final segment of a baseline start. Attractive scholarships were also in place for the top five in the event.

The first 20-lap segment of the Late Model class event began with 14 vehicles, with Humboldt County driver Dustin Walters on pole position in a reverse start. Walters circled the course to finish first in the opening 20-lap segment to take a $1,000 bonus despite a warning stoppage caused by a spin in the terrain from Lakeport driver Mike Neilson’s vehicle.

Walters held pole at the restart of the second segment, scheduled for 40 laps. Brandon Ash passed Walters after several side-by-side laps. As Ash held the lead, Walters’ car seemed to lose some handling, putting him on the ground, eventually retiring due to a flat tire.

David Miller took advantage of a 44th lap spin from Kenny Demello which led to Ash losing his lead. On a restart, Miller took advantage of his outside position to get ahead of the field and held it through the 50 lap count to earn a $1,500 segment bonus. Miller was not drawn to the $2,500 comeback bonus shot and opted to stay ahead of the pack for a safer route to the $5,000 first grand prize.

Miller and Ash collided after the restart on their way to the green flag. The drivers collided, with Ash’s outside car being pushed into the side wall with a fire erupting as the car eventually landed upside down. The speedway crew extinguished the flames as an uninjured Ash crawled out of the vehicle.

Fortuna’s David Henderson was in the lead after Miller and Ash pulled out of the night’s main event, with Nissen resuming in second place. Nissen navigated the slow end segment traffic to secure a big lead that would earn him the $5,000 top prize. The late 2021 Model Champion, Henderson, finished second and received a $4,000 prize. Mike Doss finished third, Brandon Barnwell fourth and Mike Neilson fifth to complete the top five.

The “Rhody 100” victory is the biggest victory for the long-time Nissen of Willows rider.

More high-speed races are scheduled at Redwood Acres, with the next race day scheduled for May 14.