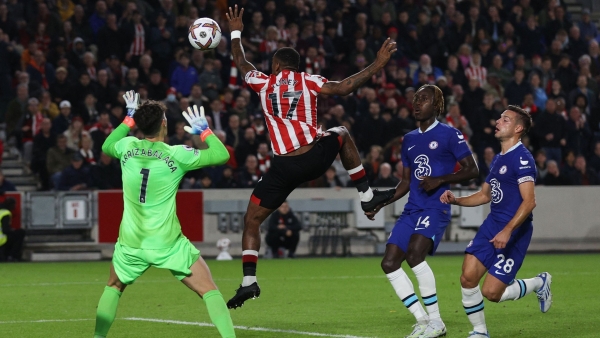 Kepa Arrizabalaga is relishing in Graham Potter’s confidence in him after putting in another excellent performance in Chelsea’s 0-0 draw with Brentford on Wednesday.

Although Chelsea dropped points in the Premier League for the first time under Potter after struggling to create chances, they had Kepa to thank for preserving their unbeaten record under the former Brighton and Hove Albion boss.

Kepa made five saves – including three against Ivan Toney – as Chelsea kept their fifth consecutive clean sheet in all competitions.

The Spaniard – who would have been considered surplus to requirements of Potter’s predecessor Thomas Tuchel – has been given a new lease of life in recent weeks and is relishing his run in the team.

“I feel very good, I feel confident with and without the ball. I feel like I’m helping the team when they need it, so [I’m] happy,” Kepa told Amazon Prime.

“Of course every player needs that confidence, that push, and I think for the goalkeeper it’s even more important when there’s continuity.

“We are not happy because I think they had chances, but we had chances, and the last fifteen minutes we played inside their box all the time. Our feeling is like we lost two points.”

Kepa has now kept five clean sheets in eight appearances this season (in all competitions), while Chelsea have recorded eight shutouts in their last 11 London derbies away in the Premier League, winning nine (D1 L1).

However, Chelsea only managed to hit the target with five of their 14 attempts (36%) against stubborn hosts Thomas Frank, including three after the 85th minute.

Despite the Blues’ lack of creativity, Potter refused to criticize his team’s performance, telling Amazon Prime: “We’re always disappointed when we don’t win, but over the course of the game one point is about right.

“We expected a really tough game. The spirit is good for us, we gave it our all. It’s not easy with the schedule we have, but the boys gave it their all, I’m proud of them.

“We wanted to do a bit better in the first half, but you have to give your opponent credit.”

Chelsea looked to have suffered another blow when Conor Gallagher was substituted after 15 minutes, but Potter revealed the England midfielder was not feeling well and should make a quick return.

“I didn’t talk to the doctors, but he just felt bad,” Potter said of Gallagher. “He thought he was going to be sick, so hopefully it’s only 24 hours and he’ll be fine.”