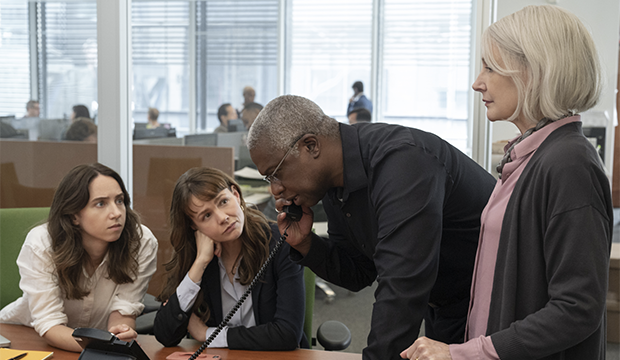 Welcome to Oscar Experts Typing, a weekly column in which Gold Derby editors and experts Joyce Eng and Christopher Rosen discuss the Oscar race – via Slack, of course. This week, we debate the prospects for “She Said” as it hits theaters.

Christopher Rosen: Hello Joyce! We’re back on the Friday before Thanksgiving and with plenty of exciting new releases hitting theaters to discuss – no one will notice, at least judging by recent box office reports. On the foodie front, ‘Bones and All’ and ‘The Menu’ have been released – ‘Bones’ is in limited release before expanding on Thanksgiving, appropriate for a movie about cannibalism. I’m a fan of one of those movies – here’s a hint – but my opinion aside, it looks like the two are facing a slightly uphill battle on the awards front. ‘The Menu’ is probably more of a Golden Globes play in the comedy categories – Ralph Fiennes and Anya Taylor Joy feel like pretty strong bets – while “Bones and All” should garner critical acclaim, lots of Letterboxd love, and maybe some deserved Oscar nominations for David Kajganitch in a suitable scenario and Trent Reznor and Atticus Ross in score or even in original song. But it’s the other movie out today, in wide release, no less, that has me baffled. I tap, of course, on my beloved “She Said”. Joyce, this movie rules. It’s not just about something – good journalism, speaking truth to power – but super entertaining. Maria SchraderThe drama is extremely well done and incredibly watchable. The performances are also at the top: Carey Mulligan is effortless, Robert Redford at Zoe Kazanit is Dustin Hoffman. There are also good things about the supporting cast, especially Peter Friedman and André Braugher. When I saw “She Said” at the New York Film Festival, I thought it might be a serious threat to several nominations, including Image, Supporting Actress, Adapted Screenplay, Score , the editing and maybe even the director. But now I can’t deny that it looks like a lark. Is the decided lack of buzz – plus what I assume will be unsightly ticket sales numbers – a “She Said” sign might be better off asking for a kill fee, or this journalism drama a- there the means to return to the first page? (Journalism?)

joyceeng: It’s a wonderful weekend to be a “Succession” stan at the movies. “The Menu” is full of “Succession” peeks behind and in front of the camera (with a line from the show to boot) and “She Said” features Frank Vernon facing Carey Mulligan backed by a killer Nicholas Britel score (she taps while listening to the Grammy-nominated season 3 soundtrack for the umpteenth time). Too bad “Armageddon Time” doesn’t open today as well. “She Said” is a great film and a great journalism film and certainly deserves all the thumbs above the fold, but my initial reservations a month ago about its Oscar bid haven’t really changed. I’d love to see it fall into a handful of categories – and I still think it’s possible in a couple – but I feel like the noise for it never peaked, even after it opened at strong reviews at the NYFF. For some movies it’s a double-edged sword to overhype, but in this case I think it could have used a little more hype, especially ahead of a wide release on the second weekend of ‘Black Panther: Wakanda Forever” and just before Thanksgiving when its Universal companion (and studio No. 1) “The Fabelmans” widens. It’s not going to blow the roof off the joint this weekend, so the best-case scenario is that it has good word of mouth and legs. Regardless of the box office, I think it’s going to be a priority filter for the industry, for obvious reasons, and then it’s a matter of how they respond to it. Although it is a serious topic, which it skillfully handles with care and respect for the victims, “She Said” is very watchable and funny, and is not difficult like some other contenders (hi, “ Bones and All”). I only have it in adapted version at the moment, but as of yesterday you still have it in Best Picture and Best Supporting Actress for Mulligan, even though you cleared the room for John Smart in “Babylon” and Hong Chau in “The Whale”. If “She Said” sinks – again, I hope it doesn’t – will you go down with the ship?

SEE Oscar Experts’ Slugfest: ‘Babylon’ Bursts onto the Scene, But How Far Will It Go?

Christopher Rosen: The short answer is “yes”, but let me type in a few more words to help add context: I think the three categories “She Said” should consider at this point are the “CODA” trifecta: image, adapted scenario and support. For Best Picture, as we said, there’s a lot of flexibility on the backend and so I think ‘She Said’ is still a valid option alongside other potentials as well like ‘The Whale’ or ‘The Woman King” or “Alive.” I’ll leave it for now, or until the Precursors tell me it’s time to abandon ship. In the adaptation there aren’t a lot of slam dunks beyond the obvious – that’s why I also have “Bones and All” there – so I think that’s the best bet for the recognition of “She Said”. As for the supporting actress: Well, it’s not so quietly the most competitive category of the year. Mulligan, however, has a few things going for her: She’s a borderline head, she has several memorable scenes, and it seems the academy likes her — at least enough to get her nominated. I’ve got it winning right now, and hey, why not? (Inset: You’ll be surprised to know that I’m already willing to flip-flop on my clever prediction for a return to Kerry Condon. I contain multitudes?) But let me go back to something you mentioned earlier: maybe the biggest hurdle for “She Said” is that it’s Universal’s #2 priority this month here behind “The Fabelmans”. There’s not much to do about it now – but releasing “She Said” between the limited and wide release of Steven SpielbergThe Oscar favorite looks like a tough beat – but if the studio waited any longer, ‘She Said’ would likely get lost in the jaws of December releases like ‘Avatar’ and ‘Babylon’. On Thursday, we saw MGM debut “Women Talking” from its limited Dec. 2-23 arc. What I’m typing, I guess, is maybe it would have been better for “Women Talking” and “She Said” to hit theaters in October, closer to their festival debut? But then they would risk getting lost in the mix of “TÁR” and “Armageddon Time” and “Till”. Films, now more than ever — at least in terms of quantity? Joyce, I’m turning this into a Puck newsletter or something, so save me from myself and the pontification of the industry and tell me what everyone wants to know: how can- get us from Nicholas Britell the “She Said” recognition he deserves (he types while listening to the sheet music “She Said” on Spotify)?

joyceeng: The original high score is stacked and I’m unfortunately not predicting our guy right now because like I said I don’t think he would win so I’d rather not see him store names in vain. It’s an anti-diction only because I don’t want to see him lose again. But I’ll obviously add it if it looks like we’re headed in that direction. The shocking thing about your Smart flip-flop is that you only consider it 24 hours later. A new world record in your impetuous propensity for about-turns. I like to think my fall for Condon yesterday was a factor. Best Supporting Actress feels so messy in the best way – we need to savor this moment before a five-way consensus starts working and neutralizes the fun and suspense – so Mulligan isn’t out of place. She might have, like, 20 minutes less screen time than Kazan, but they’re co-narrative leads (again, I don’t care where she campaigns) so she would have that advantage over the most of its potential competitors in the category, except for Thuso Mbedu, who is a secret lead in “The Woman King” and a long shot. You also came across a single woman talking about “Women Talking”. Did the change of date cause you to make another abrupt U-turn?

SEE Oscar Experts Typing: Why ‘The Fabelmans’ is still the one to beat (for now)

Christopher Rosen: No, in that case, I’m sticking to it: I’ve said it before and it doesn’t make me happy, but I’m a little concerned about “Women Talking”! But that’s a strike for another day, perhaps not until mid-December. Joyce, can you have the last words: FYC hyper-settling?

joyceeng: Conheads will love “Le Menu”. “Women Talking” doesn’t worry me as much as you do, but I flirted with the idea of ​​giving up one of Jessie Buckley and Claire Foy for Mulligan last month. Alas, I didn’t. I can see the top reviewer awards and trailblazers being all over this category and I sincerely hope they are because we need this chaos. Thanks, michelle williams?

TO PREDICTthe 2023 Oscar nominees before January 24

Make your Gold Derby predictions now. Download our free and easy app for Apple/iPhone or Android (Google Play) devices to compete against legions of other fans as well as our experts and editors for the highest prediction accuracy scores. Check out our latest betting champions. Can you then top our estimated rankings? Always remember to keep your predictions up to date as they impact our latest racetrack odds, which are terrifying chefs and Hollywood stars. Don’t miss the fun. Speak out and share your opinions on our famous forums where 5,000 showbiz leaders hide out every day to follow the latest awards rumours. Everyone wants to know: what do you think? Who do you predict and why?

Seat in the United States Senate in 2024