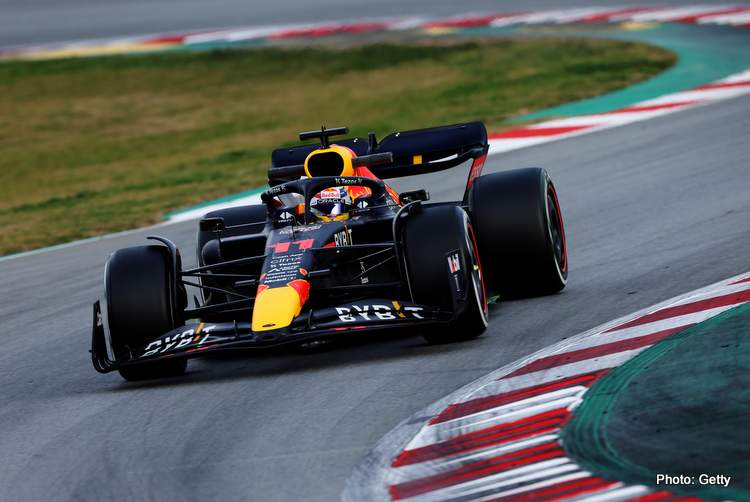 Red Bull: Checo returns are about the same as Max’s

Red Bull day two Formula 1 Testing in Barcelona was not as smooth as the first ones, but at least the feedback from their drivers on the RB18 is identical.

Sergio Perez had the chance to drive the team’s new RB18 on Thursday but couldn’t match Max Verstappen’s total of 147 laps the previous day as the Mexican suffered gearbox problems which reduced his race to just 78 laps with a best time of 1:21.430 placing him seventh on the time screens.

Red Bull, however, didn’t seem to mind their gearbox concern, but were happy with Perez’s setup with the new car.

Guillaume Rocquelin, Head of Race Engineering, said of the day: “Checo got up to speed quite quickly this morning and his comments are pretty much the same as Max’s, which means we know where we are going and that everything is pretty much settled.

“Every time the car comes back to the garage we make changes and refine the steering so overall I’m happy,” he continued.

“We had a little problem today which meant we lost around half a day of racing, but we’re not particularly worried about the problem itself, it’s just a pain that we lost this time there.

“However, this shouldn’t affect things in the long term, as we have a solid platform and are happy with the progress we are making,” Rocquelin said.

Perez also commented on his truncated day, as he tried to focus on the positives, which are the things he learned in the cockpit of the RB18.

“We learned some good lessons from today and I’m happy with that,” the Mexican said in the team’s press release.

“We’re trying very different things and we have a lot of information to process, so I think in the meetings it’s important to go deep and give the engineers as much feedback as possible.

“The issue with the gearbox took a little longer to resolve than expected, but that’s okay, these things are expected to happen in testing,” Perez said of the failure. he met on the track.

“I’ll be back in the car tomorrow and hopefully the weather will stay dry,” he hoped.

Perez will share driving duties with Verstappen on the final day of racing, as Pirelli plans to run a wet weather simulation in the afternoon session.

Voice of Formula One returns to Australia for a live show