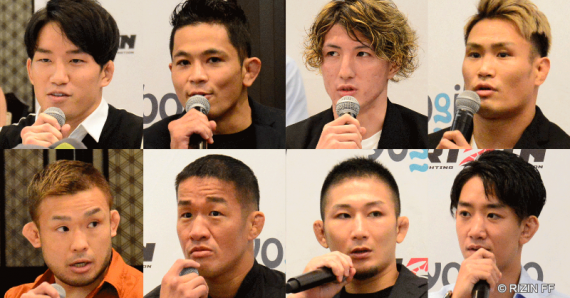 A quartet of Bantamweight Grand Prix quarterfinals will be the star attraction of the Rizin Fighting Federation 30 on September 19.

The Japanese promotion recently announced the pairings for their support, which are as follows: Kai Asakura vs. Alan Yoshihiro Yamaniha, Naoki Inoue vs. Yuto Hokamura, Hiromasa Ougikubo vs. Takafumi Otsuka and Kenta Takizawa vs. Yuki Motoya. Rizin officials determined the clashes for the quarter-finals.

“We have matched the fight where we will have no rematch and have some intriguing new fights for the quarterfinals of the bantamweight grand prix,” Rizin CEO Nobuyuki Sakakibara said at a press conference. “We will prepare the event to accommodate 5,000 spectators at the moment and I hope the government will allow us to open the arena for additional spectators. The Tokyo Olympics will be held in difficult situations and at the moment the media are not highlighting the athletes. We will support our fighters and do whatever we need to shine a light on our fighters and tell their stories. “

Rizin 30 takes place at the Saitama Super Arena in Saitama, Japan, and is available via pay-per-view through Rizin Live. The card will also see the return of atomic weight champion Ayaka Hamasaki, as she takes on Emi Fujino in an untitled bout. Hamasaki defeated Fujino under the Jewels banner in December 2012.

“The last time we fought I beat her by decision. I’m glad we got to see each other again after nine years, ”Hamasaki said. “We will fight in a lower weight class this time around and I appreciate that she came down. I don’t intend to be friendly and will end the fight this time by KO or by submission.