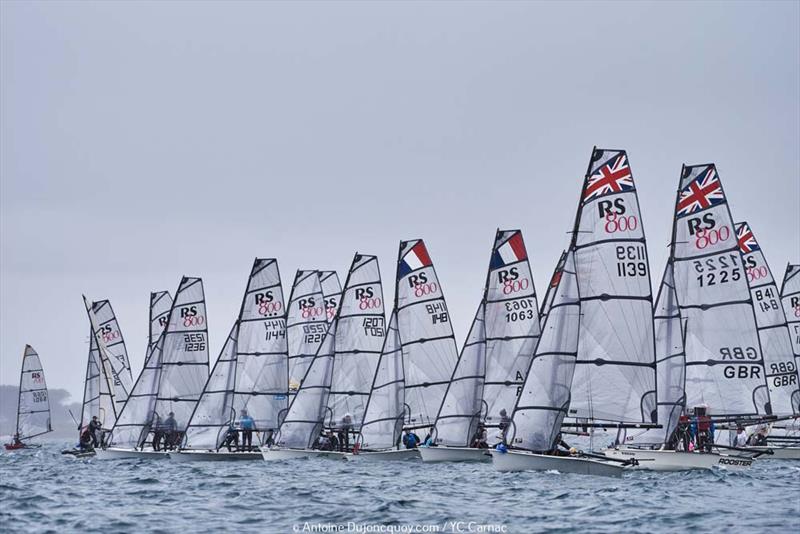 Carnac Yacht Club is always a favorite spot for touring RS800 British sailors with its sunny white sand beaches and warm seas. Many of the British contingent began their holiday with a sunset cruise through Portsmouth Harbour, beers in hand for a late-night conversation on deck, setting the tone for the days to come. This year it was great to see record participation from French sailors, representing almost half of the fleet, and almost a third of the RS800s had women at the helm.

The first day of the championship promises to be hot and windless. There was a long but enjoyable wait ashore punctuated by coffees and croissants, providing a great opportunity to catch up with friends in all the RS fleets missed over the past couple of years. Eventually the sea breeze came in late afternoon, 8-10 knots from the southwest, and we rushed to the slipway. On the course of the race, the committee and the competitors faced great swings in the wind, but by the time we arrived ashore at 7 p.m., there were no major surprises in the results with the British National Champions Tom Morris and Guy Filmore level on points with 2015 European Champions Phil Walker and John Mather, scoring 1st and 2nd each in both races. The yacht club prepared a welcome feast of wine and snacks for the sailors, kindly postponing it for a few hours due to late-night racing.

The second day was almost a washout and repeated under similar light and sun conditions. The race committee again kept the fleets ashore until they were satisfied that the sea breeze had stabilized, so there was only time for two of the three scheduled races. Perhaps it was a good thing for the eventual winners of the race who had become big on the first night, which meant that at least one of them would have wandered the streets of Carnac in search of his AirBnB at 3 am. While waiting in the dinghy park, we were entertained by a seemingly endless parade of 850 very cheerful vintage and classic cars, vans and motorbikes, including a beer barrel van, driving along the waterfront and all honking and clapping.

On the race course, Tom and Guy gained a two point advantage over Phil and John, thanks in part to the latter dropping the mainsail sheet at the last windward mark of race three to give Tom and Guy a crucial victory. Hugh Shone and Fiona Hampshire sailed brilliantly to win race four, pursued by professional GBR team sailors Steph Orton and Alex Hughes.

Saturday evening was the traditional RS800 Crews Union Dinner, an opportunity for crews to share tips and tricks on how to deal with the trials and tribulations of getting the one in the back holding the stick safely on the race course. Meanwhile, the helmsmen met at another restaurant to discuss bimbling and capsizing technique, in a healthy mix of Franglais. The fleet then converged on the Exit Bar, where the hardiest sailors probably stayed longer than they should have, given the windy forecast for day three and the likelihood of having four races. instead of the three planned.

Day three lived up to the promise of the forecast, delivering perfect RS800 conditions of 15 knots, flat water and sunshine. The committee laid out the course close to the coast, giving the possibility of turning the rocks with advantageous offsets on the right or of blowing left in clear air.

The race started pretty well on time after a few rappels. Hugh and Fiona led the pin to win the first race. Tom and Guy finished second in that run and then fired three more shots to earn their first European Championship victory with a day to spare. Meanwhile, Luke and Emma McEwen continued their steady run with 2nd and 3rd place finishes to move up to second place overall, happy to find some moments of good speed after changing teams last year. They enjoyed the tight race down the left side of the beats with the fast new team of David Conlon and Ed Gibbons clearly reveling in the stronger breeze. The downwind was spiced up dodging the RS700s and numerous lobster pot buoys. The leading French team of Gilles Peeters and Heloise Baize moved up the standings with a well deserved 2nd place in the last race. Phil and John took advantage of two of the longer intervals between races to return to the club for coffee.

Despite a big day of four races, we were ashore in time for baguettes and a siesta before the big dinner of paella, chocolate brownies and apple pie prepared by YC de Carnac. After all that excitement, there didn’t seem to be much appetite for a bar crawl afterwards.

The forecast for the fourth day was that we weren’t going to expect a sea breeze: drizzle turning into driving rain, but at least there was a good gradient wind of 10 knots from the south. Tom and Guy, with the championship in the bag, swapped helm and crew. It turns out that Guy is quite a handy bar despite Tom’s crew work. He was kind enough to retire at the finish of both races to avoid embarrassing us with what would have been a 3rd and a 5th. Phil and John rode two great races holding Luke and Emma one place behind in each race to even the points overall, taking 2nd place on the countdown. Hugh and Fiona took their third shot of the series in the final race to take 4th place overall, hotly pursued by Gilles and Héloïse who finished 5th overall and first French team. Martin Orton and Ian Brooks took 3rd in Race 9 to nearly catch David and Ed for 6th overall, losing on the countdown, but it was enough to clinch the all-important Orton Family Championship with a point ahead of his daughter Steph and Alex in 8th. This ensured Steph and Alex a return to Caen, as well as Steph being the first woman at the helm.

Bryan Ormond and Anna Prescott, sailing the oldest boat and arguably the oldest set of sails, found the gas pedal in the final race to finish 3rd, passing Guy and Tom and pushing Phil and John back to ‘at the arrival. This propelled them to 11th overall to win the Mid-Fleet Heroes award which was a very nice bottle from title sponsors Salcombe Gin.

Back on land, the club prepared another delicious spread of Breton cider and croque-monsieur to help us get home. A slight hitch came when the protest committee said alcoholic prizes could not be presented at the awards ceremony (apparently banned in French sports sponsorship). Our wonderful organizer Heather applied her mix of diplomacy and lateral thinking, splitting the awards show in two, first the Salcombe Gin Awards and then the YC Carnac Awards, never to be filmed together. Meanwhile, aerial entertainment was provided by a seagull attacking the photographer’s drone.

Our thanks go to all the YC Carnac volunteers who made the 2022 RS800 European Championship a very pleasant and friendly event afloat and ashore, Salcombe Gin for providing beautiful bottles of their plants, the La Boulange bakery for delicious food, Heather for all her hard work working behind the scenes and all the new and old teams who have made the effort to travel from all corners of France and Britain putting the past two years behind us and reconnecting with the friendly, sociable yet competitive race we love. Congratulations to Tom and Guy, our new RS800 European Champions.

Full results are available at www.yccarnac.com/regates-morbihan/europeen-rs-2022