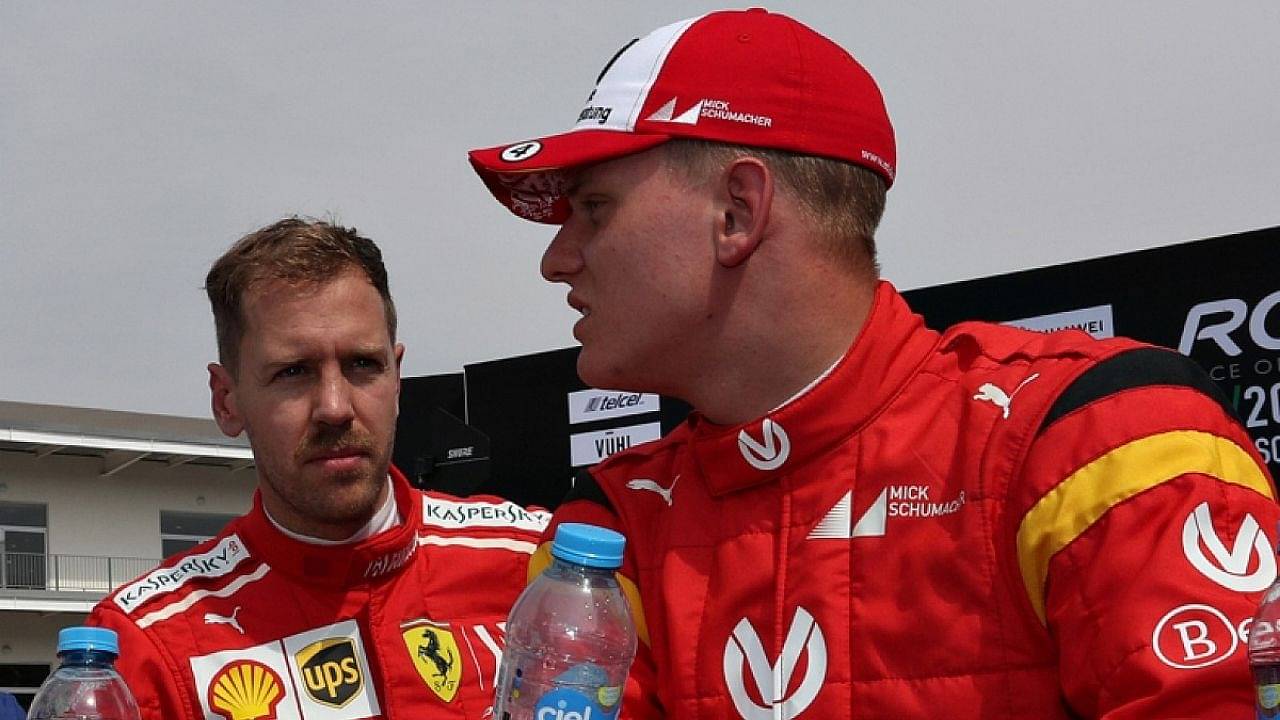 “Sharing the car with Mick is very special to me”: Sebastian Vettel is looking forward to teaming up with Mick Schumacher at the Race of Champions 2022

Sebastian Vettel is very excited to team up with his German compatriot Mick Schumacher in the Race of Champions 2022.

Sebastian Vettel shares a very close bond with the Schumacher family. Michael Schumacher was the childhood hero of Vettel, who became a close friend when the two started sharing the F1 grid together. The duo have 11 world championships between them and have also won the Race of Champion 6 times as a team.

In 2022, Vettel will team up with the son of his idol Mick in the Race of Champions. The event will take place in Sweden, on the frozen Baltic Sea at Pite Havsbad. This will be the second time that we will see the two teaming up at this annual event. They were teammates in the race in 2019, where they finished 2nd.

They were teammates on Saturday …

This time however, Vettel and Schumacher will be looking for a victory. The race in Sweden will be different from those that took place before, as the riders will now have to show their skills on the snow and ice of the icy Baltic waters.

Vettel is looking forward to this new challenge with Mick in January.

“I think it will be a huge challenge, before Scandinavia, in winter.” said the Aston Martin driver. â€œBut I think it will also be a lot of fun, and that’s why I’m participating in it. That’s what most of my memories are about, it’s about the fun on and off the track that I shared with Michael.

Sebastian Vettel admits Michael Schumacher will be missed at event

The four-time world champion added that he will miss Schumacher Sr.’s presence when they take their places on the grid. He added that sharing the track, the car and the team with his son Mick was “very special” to him.

“It’s very sad and a shame that Michael wasn’t here to watch us. I would have been happy to tell him that it was time to take a step back and let Mick take over!” Said the former Ferrari driver .

â€œAnd obviously it’s great to now share the track, the car and the team with Mick, so it’s special, very special for me. But yeah, I’m really looking forward to spending some time together as â€œTeam Germanyâ€. And hoping not to finish second but to win the big one this time. he concluded.

I found this photo (apologies for the watermarks) and had a good laugh.

Michael Schumacher first teamed up with Sebastian Vettel for the Race of Champions in 2007 where this photo was taken. And look what he learned from Sebâ€¦ ðŸ„ðŸ˜ pic.twitter.com/jTqCHCQnTr

Mick Schumacher, meanwhile, said he wanted to win the race this time around after missing it in Mexico. But, his primary goal will be to have fun.

â€œI think we came very close to winning in Mexico two years ago. So it will be time to try to win it. explained Driver Haas.

“And obviously, like Seb said, I think it’s just about having fun, driving great cars, and also enjoying the free time and the off-season in a certain way, but still the do with what we love, and that’s racing. “

Read also: Mick Schumacher surprised Haas with his skills towards the end of the season