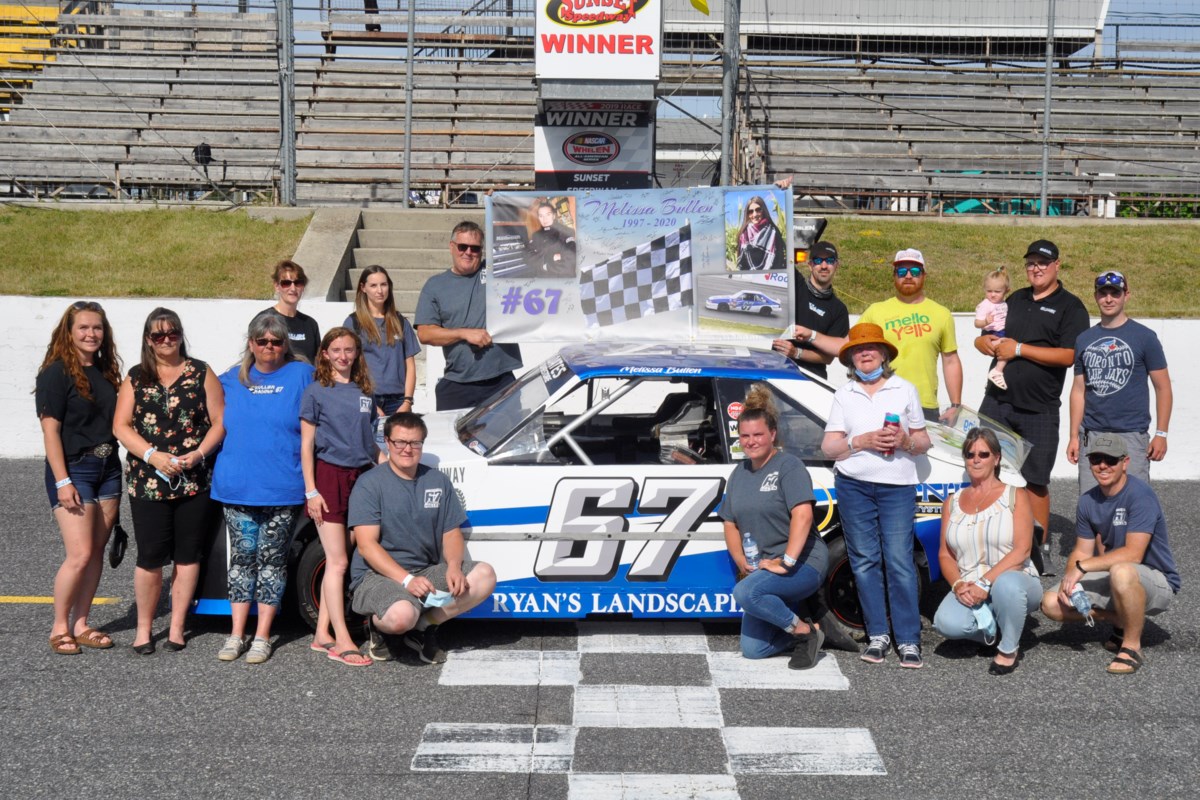 Last weekend, Sunset Speedway in Innisfil hosted a memorial service with the Bullen family in honor of 23-year-old racing driver Melissa Bullen, who tragically died in May 2020 after battling mental health issues.

A minute of silence was observed on the track on Saturday evening by family, friends and other racing drivers as Sunset Speedway held a solemn ceremony, commemorating the life of Melissa Bullen.

Following in the footsteps of her grandfather Fred, father Phil, and brothers Branden and Josh, Melissa was an avid stock car enthusiast who “developed” as a driver over the past several years.

Melissa loved to play football and played for the Bradford Eagles. She got involved at a very young age in stock car racing alongside her family.

She started competing in stock car races in 2005, competing in the mini stock division under race number 67 – the same number her father and grandfather raced under.

In 2014, Melissa quit playing football due to a knee injury and decided to focus on racing cars, having already won several races and podiums.

“She’s become a much better driver! shares Phil. “She was one of the best runners.”

Phil says his daughter (whom he called Mel) had suffered from years of mental health issues and received ongoing treatment and care through the Royal Victoria Hospital (RVH).

“We thought she was fine,” said Phil. “Then all of a sudden something changed.”

Phil remembers that the months leading up to his daughter’s death seemed normal and Mel looked “perfect”; The family had just returned from a trip to Florida in November 2019 and were shopping in Innisfil (where the Bullens now reside).

“We really noticed that something was wrong the day before,” adds Phil. “It’s hard because you don’t know. You think they’re okay, and if they don’t, they won’t tell you.

Mel is remembered as a “big girl” who had lots of friends and loved babies.

“She was always playing outside, she was a good kid,” recalls Phil.

The Bullen family were unable to have a public memorial last year due to Covid restrictions, and Sunset Speedway has been closed for all of 2020 due to the pandemic.

In memory of Melissa, Sunset Speedway owners Sandra and Brian Todish presented the Bullen family with a Melissa banner with her race number (67), signed by other racing drivers, friends and staff . A second banner that has been created will be kept at Sunset Speedway “forever and ever”.

“We want to share our condolences to the Bullen family,” Brian said on Saturday. “We wanted to do something special (referring to the banner)… thank you for being a part of our lives! “

The local “Ladies of the Oval” racing car group created a sticker with Melissa’s name and race number that was placed on all race cars at Sunset Speedway in her honor. The group also had the commemorative sticker transferred to jerseys and t-shirts for sale, with the proceeds going to the RVH and CMHA (Canadian Mental Health Association).

A new award was created in honor of the late driver, the “Melissa Bullen Most Improved Female Driver Award”, open to all women who race on asphalt in Ontario, with a trophy and a cash prize of $ 500.

On Saturday night, Melissa’s brother Branden drove his car around the track as a ‘pace maker’ before some of the races started, giving the ‘a [wo]man misses salvation ‘as he rolled down the track. His other brother Josh ran in several heats over the course of the evening, winning a race.

Melissa’s race car was parked in the middle of the track with her helmet resting on top of the car for the rest of the evening.

Sunset Speedway will be open to the public on Stage 2, and visitors will be able to see Melissa’s banner hanging on the track at that time.