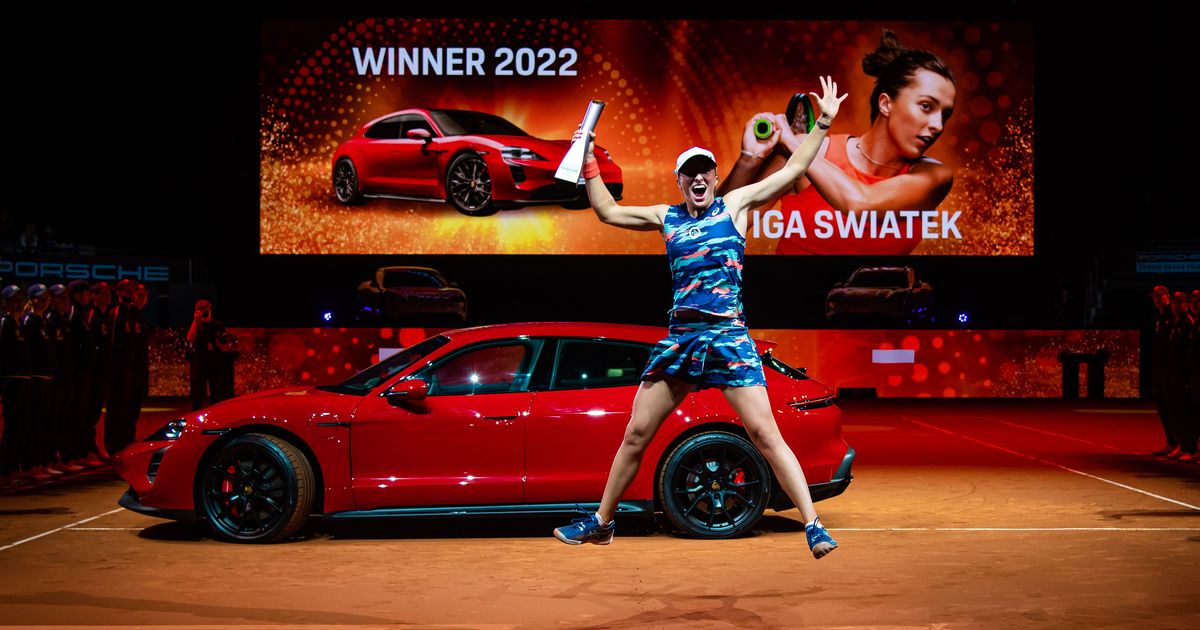 STUTTGART, Germany — Iga Swiatek wants to entertain you. The world No. 1 proved it once again at the Porsche Tennis Grand Prix, where she extended her winning streak to 23 consecutive matches to win her fourth straight title.

Swiatek entered her first clay-court event of the season after a dominating performance for Poland at the Billie Jean King Cup, but her commitment to domestic competition meant little time to begin her adaptation to clay.

No time? No problem. Just four days after her last match on hard courts, Swiatek played her first round in Stuttgart and defeated Eva Lys, Emma Raducanu, Liudmila Samsonova and No. 4 Aryna Sabalenka to win her third clay court title. Her 3 hour and 3 minute victory over Samsonova was the longest game of her career, earning a resilient 6-7(4), 6-4, 7-5 victory.

“Well, that’s another tournament where I surprised myself,” Swiatek told reporters after the win. “That I can do it and basically that I don’t need to be 100 per cent perfectly prepared or feel 100 per cent to still play really good tennis and play solid matches. The transition was pretty quick and I had a lot of doubts. I didn’t really want to focus on that and I focused on what I have influence on. So yeah, that’s another tournament that showed me I could do it no matter what.

The world No. 1 joined the WTA Insider podcast to try to figure out what she’s been up to in the past nine weeks before discussing her love of cats, confetti and memes.

WTA Insider: You said during your press conference that you had a lot of doubts going into this tournament. What were those doubts and how did you address them throughout the week?

Swatek: Basically, the last time I played on clay was a year ago, so I wasn’t sure how good my transition was and if I could do it in two days. Before the first game, I think I spent two hours on the court. I have always heard that this surface is delicate and it is weird and different from others. That’s why I had most of my doubts, basically.

I’m quite proud of myself because during the tournament I was able to adapt and learn, because before it wasn’t so easy. Right now I feel like while I can learn a lot, it’s just calmer at first because I can trust my skills and abilities a bit more.

WTA Insider: Do you feel like you’re on autopilot?

Swatek: Not really. Today was a good day for me to be in the zone and really focused, but yesterday I felt like I had to work harder and harder every game to stay focused. So yesterday, I didn’t feel like I was on autopilot because every day is different. You wake up and you can feel it. Many thoughts go through your head and you know it will be harder to stay focused.

So yeah, I always feel like every day is different and some moments are tricky. So I don’t feel like I’m on autopilot, but I feel like I can use my skills better and better and play tennis more efficiently and be smarter on the court .

WTA Insider: You were in Stuttgart without your coach Tomasz Wiktorowski and sports psychologist Daria Abramowicz. But your father and your physical trainer were there. What was it like navigating to a new tournament, with unique conditions, without your entire squad?

Swatek: Honestly I have to adapt to all these things but on the other hand they let you play without expectations because you know it’s different and you can make mistakes and you have to accept that. So even when everything isn’t perfect, it’s a little easier to play because you’re going to forgive yourself if you’re going to make mistakes. You’re going to say ‘Hey, this is my first time here, stay cool, let’s just gain experience.’ But you still have to do the work. I think I did well this week.

It didn’t matter to me whether my whole team was there or not, because on the court I’m alone anyway. But of course, at times, I felt like I was missing some of the people I relied on. But tactically I could prepare in the same way because my coach, we had daily discussions about how I felt here and what I could do better. He has so much experience from being on tour and being here with Agnieszka so many times, so I really wanted to use him.

Daria was talking to me too. We had a few sessions this week, we need to talk about the clay season overall and my feelings here and how I can focus on all these doubts to work harder and find solutions and maybe be excited to the idea of ​​meeting the challenges that I have. So we worked a lot on my attitude. They work very hard even though their bodies are not there. So all credit goes to my team because without them I would be really confused here.

WTA Insider: Do you feel like you’re doing anything special right now?

Swatek: When I allow myself not to be a tennis player but to be someone who watches tennis, I can feel it.

WTA Insider: What were you doing to pass the time this week?

Swatek: I just had a day off. I wanted to have a peaceful time in my hotel room because before I had the Billie Jean King Cup and then I had to train here and think a lot on the surface and analyze a lot. So I took advantage of this day off to rest properly and not be busy with everything that is going on. The amount of media and autographs I’ve done since Doha has been a bit crazy. Of course, having that day off helped me recover better. I’m not saying it’s a negative thing. It’s just new things you have to do.

WTA Insider: It was a sold out final and we saw a lot of Polish flags flying. Are you used to your stature with the fans?

Swatek: I’m a bit used to it, but I still want to use it the right way in matches when I have the right situations. I saw before some games where the players took a lot from the public and they could come back in the games. But it’s quite easy for me because I’ve always wanted to play for people and it’s natural for me to be in front of the public. The first games after Covid it was quite difficult to concentrate properly but honestly I love it.

WTA Insider: Are you excited to bring the Porsche Taycan home?

Swatek: Yes of course. It’s a pretty weird position I find myself in because I just got my driver’s license six months ago. I’m super excited. It was a great week because I learned a lot about cars and was excited and fascinated by things other than tennis. It’s something new because for a while I was only busy with tennis.

My physio knows a lot about cars, so he’ll help me choose the right one. I don’t know if you know this, but I’m not really good at making decisions.

WTA Insider: So I have to ask you about the water bottle spillage during the semi-finals. What happened there?

Swatek: It wasn’t water so I’m lucky it didn’t go in my shoe because it was going to be sticky. There were carbs and I wanted to shake them off. For a second, I didn’t know what was going on. I saw the cameraman and I thought: “Fuck it, he must be laughing”.

I know there’s a nice GIF of that on the internet. It is also entertainment. I’m pretty happy to entertain people.

Swatek: Honestly, I was already a meme queen in college. But it was pretty mean of the other kids. But I was. Maybe that’s another thing I was born to do. I don’t know if I should be happy or sad about this.

Inside Racing: The stage is set for a successful Warrnambool May Racing Carnival | The standard