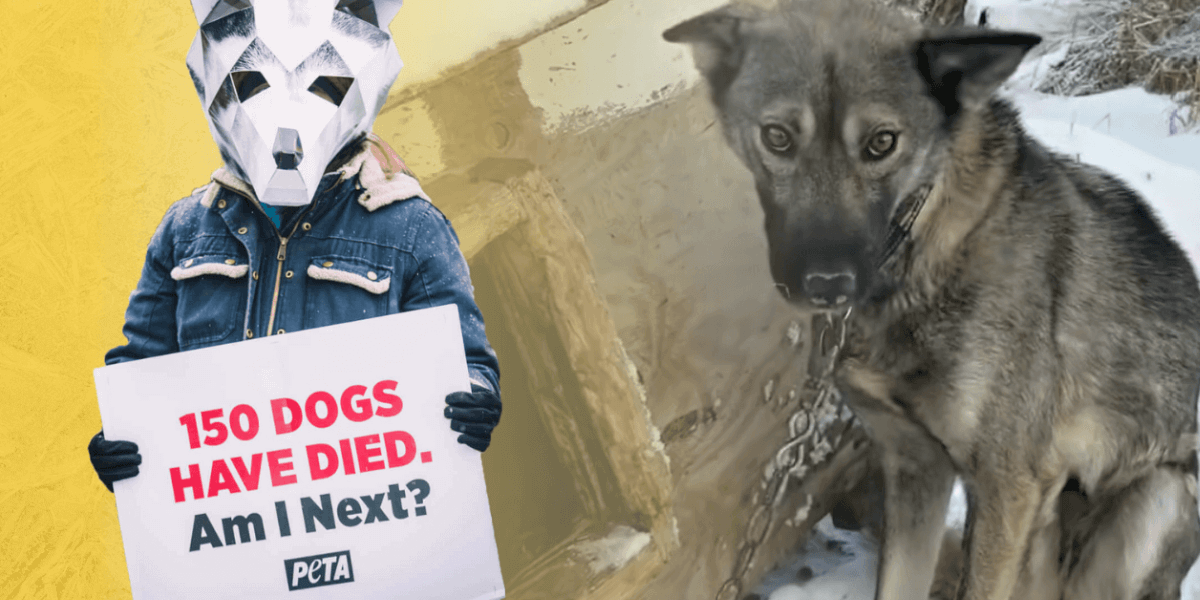 Remember 5-year-old Oshi who died of aspiration pneumonia after her musher, Richie Beattie, forced her to compete in the 2019 Iditarod? If human athletes were forced to compete to their death after inhaling their own vomit, the consequences would be disastrous: people would be imprisoned. And although Beattie – who was to win the 2019 Iditarod Rookie of the Year award – was disqualified after the dog’s death (under the rules of the race), Ed Hopkins, the musher who did winning the rookie award, announced that he would give Beattie the $2,000 prize anyway. A win-win-lose situation and, as is the norm in cruel racing, it was the dog that drew the fatal short straw.

What is aspiration pneumonia and is it a common cause of death in dogs forced to run in the Iditarod?

There’s a reason so many people refer to the Iditarod as a “death race” – check out six of the most common illnesses and injuries that plague dogs throughout the event:

The leading cause of death in dogs brought to race in the Iditarod is aspiration pneumonia, caused by inhaling their own vomit. A year before Oshi died, after the 2018 Iditarod, an autopsy report revealed that a dog named Blonde had also died of aspiration pneumonia. And of the animals that survive the race, 81% end up with lung damage and 61% with gastric ulcers. Mushers are aware of these deaths and injuries – their continued pursuit of the Iditarod Fellowship, regardless of known fatal risks, shows their utter indifference to pushing dogs to their limits and beyond.

Oshi, one of the sled dogs who had just completed the nearly 1,000 mile icy ride of the Iditarod, died of pneumonia shortly after completing the race. Over 140 dog deaths have been directly linked to the Iditarod since its launch in 1973. https://t.co/PJcvoj7MCL pic.twitter.com/jEv9AI4GXY

Dogs forced to race in the Iditarod death race have also died of asphyxiation (suffocation), but Dorado’s story is particularly terrifying: in 2013, after being dropped from the race because “he was moving stiffly”, the 5-year-old dog was reportedly buried in snow “in an area set up to care for dogs” and asphyxiated. According to reports, his corpse was discovered up to five hours after he was last checked, an entirely preventable death.

On March 15, 2017, two dogs collapsed and died on the Iditarod trail. The autopsy report said one of them, 3-year-old Shilling, died of abnormalities including “extensive pulmonary edema”, caused by excess fluid in the lungs (aka ” wet lung”, a severe respiratory condition). The other victim, 4-year-old Flash, is believed to have died of aspiration pneumonia, which as we know is also caused by foreign substances in the lungs. The deaths of Shilling and Flash, the fourth and fifth respectively of 2017, made the Iditarod race the deadliest since 2009, when six the dogs are dead.

Update: FIVE dogs have now died because of this #Iditarod race. Shilling, 3, has just died. It must end! https://t.co/PV76cEiYJx pic.twitter.com/CnkjH71zHu

Also during the particularly deadly 2017 Iditarod, a 2-year-old dog named Smoke died of hyperthermia or overheating. Smoke was being transported from Galena, Alaska to Anchorage after he was pulled from the race with an apparent wrist injury when race officials said he “passed away unexpectedly”.

During the particularly deadly 2009 race, Dizzy and Grasshopper – two of six Iditarod victims that year – reportedly died of hypothermia after being stuck outside in temperatures that plummeted to minus 45 degrees.

The 2022 Iditarod Death Race was still over a month away, but already a dog had been killed: On January 19, a team of dogs forced to race by Jaye Foucher, a musher registered in the Willow 300 and Iditarod races of this year, was affected. by a truck, killing one of them (Noddy) and injuring others. The Willow 300 is a qualifying race for the Iditarod.

He should never have been forced to race for the benefit and “entertainment” of humans.

Liberty Media and other sponsors MUST stop paying for dogs to die in races! https://t.co/fEGy3YBccl pic.twitter.com/rUJ3OMgTnP

On March 14, 2017, Groovy – who was fired from his musher team – was reportedly hit by a car and killed after escaping from a dog handler’s home in Anchorage. In 2016, 3-year-old Nash died after being hit by a snowmobile while racing. Three other dogs forced to run were injured in the same collision. And in 2015, a dog named Stuart escaped and was later hit by a car.

The Iditarod should run to the death and leave the dogs alone.

These causes of death are those we commonly see in the Iditarod – they do not include dogs that died while being forced to train for the race, those who died while chained to off-season outdoors, or those killed because they weren’t fast or fit enough for competition or didn’t meet certain aesthetic standards (for example, if they had white pads). Dogs that finish the race but are no longer useful to industry may be shot, drowned, or left to starve.

And as a PETA eyewitness investigation of two kennels owned by former Iditarod champions showed, even the dogs that don’t die on the Iditarod trail or are killed from another manner are still forced to endure widespread suffering and neglect.

It’s Birch. She endured horrendous neglect in this “kennel” co-owned by former Iditarod champion John Baker. Despite suffering a crippling and extremely painful spinal cord injury as a puppy, she was denied veterinary care and chained in the freezing cold 24/7. out of 7.

No prize is worth a dog’s life or suffering. For Birch, Oshi, Dorado, Smoke and countless other Iditarod victims, PETA will continue to protest the cruelty of the event. We’ll be following this year’s Death Race closely. Come back here and follow @peta on Twitter for updates.

Sponsor by sponsor, PETA has taken down the Iditarod – join us in defending the dogs.