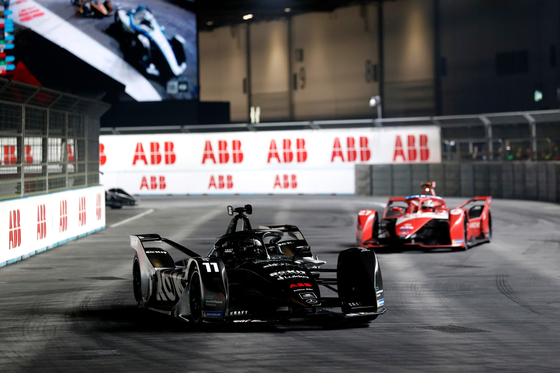 The Hana Bank Seoul E-Prix kicks off on Saturday in Jamsil, South Seoul, with the final two races of the 2022 ABB FIA Formula E World Championship and the crowning of this season’s champion.

Seoul is hosting the world’s fastest electric cars and their drivers for the first time this weekend, with the streets around the Jamsil Sports Complex hosting the first major race to arrive in the country since the 2013 Korean Grand Prix.

This season started in January in Diriyah in Saudi Arabia, passed through Rome, Monaco, Berlin, Marrakech in Morocco, New York, London and will end here in Seoul.
The Seoul E-Prix has been a long time coming, having been canceled in 2020 and 2021 due to the Covid-19 pandemic.

Instead of the crackle of the engines, these electric race cars emit a lower roar as the powertrains move the wheels forward without any of that environmentally harmful combustion.

This season, 11 teams of 21 drivers will hit the streets of southern Seoul for the final two races.

The 19-turn, 2.8-kilometre (1.74-mile) course is primarily within the Jamsil Sports Complex, home of the 1988 Seoul Olympics, with two long stretches on Olympic Road and Baekjegobun Road, running along both sides of the park.

The course begins on Olympic Road, passes Jamsil Baseball Stadium, home of the Doosan Bears and LG Twins, and into Olympic Stadium. After circumnavigating the interior of the Olympic Stadium, runners circle between Jamsil Arena and Jamsil Indoor Swimming Pool, before reaching Baekjegobun Road.

A straight section on Baekjegobun Road leads to a hard right, which brings the cars back to the start on Olympic Road.

A longer street race was originally proposed for the Seoul E-Prix, possibly around Gwanghwamun in central Seoul, but feasibility studies have pushed organizers towards the significantly less disruptive Jamsil route. .

The two races – held on Saturday and Sunday – will take place at 4:04 p.m., immediately followed by the respective podium ceremonies. Sunday’s podium ceremony, which will follow the final race of the season, will also include the crowning of the season’s champion.

Before the races, free practice sessions and qualifying races will take place throughout the day.

While Seoul was hit by heavy rain throughout the week leading up to the race, Seoul E-Prix organizers did not respond to requests for comment on what would happen if the wet weather continues. during the weekend.

Previous E-Prix races this season have also struggled with the weather and may provide some insight into how organizers are likely to react if similar issues arise in Seoul.

In Jakarta in June, Formula E operations manager Gemma Roura Serra said the race could be held in light rain, but if there was a heavy downpour – the venue had been hit by a hurricane a week earlier. early – the race would be stopped. . In New York in July, that’s exactly what happened, with a heavy downpour in the final 10 minutes of the race forcing officials to halt the race and declare a winner based on the standings from the previous lap.

The Korea Meteorological Association is not currently forecasting heavy rain for the Jamsil area over the weekend, but with Korea’s notoriously temperamental summer weather, there’s always a chance the skies will open up. If this happens, it seems likely that the race will be interrupted or potentially even completely stopped depending on road conditions.

Alongside Korea’s first electric car race, the city of Seoul will hold what it hopes will be the capital’s biggest tourist festival, Seoul Festa 2022, from August 10-14 at the Jamsil Sports Complex.

The Seoul Festa will include a Seoul Shopping Festa from August 10 to 31, with more than 3,000 department stores, duty-free shops and online outlets offering discounts of up to 50%, as well as water sports and movies in parks near the Han River.

Seoul Festa events will also take place on site, with the city taking over the complex surrounding the Jamsil Indoor Pool.

The Allianz E-Village, which includes places to eat and drink, shop, learn about motorsports, see futuristic cars and try out the latest technology and racing simulators, will occupy the Jamsil Student Gymnasium , ensuring there is something to entertain visitors .

During the race weekend, a number of Korea’s biggest music stars will take to the stage alongside the Seoul E-Prix, with popular stars CL, Zico and Dynamic Duo all performing on the main stage after the podium ceremonies.

Tickets for the Seoul E-Prix range from 99,000 won ($76) to 500,000 won and can be purchased on Korean e-commerce website WeMakePrice, with step-by-step instructions in English on how to navigate the ticketing site available on the FIA ​​Formula E website.

If you can’t get there in person, Formula E races can be watched live on TV around the world and on SPOTV here in Korea.