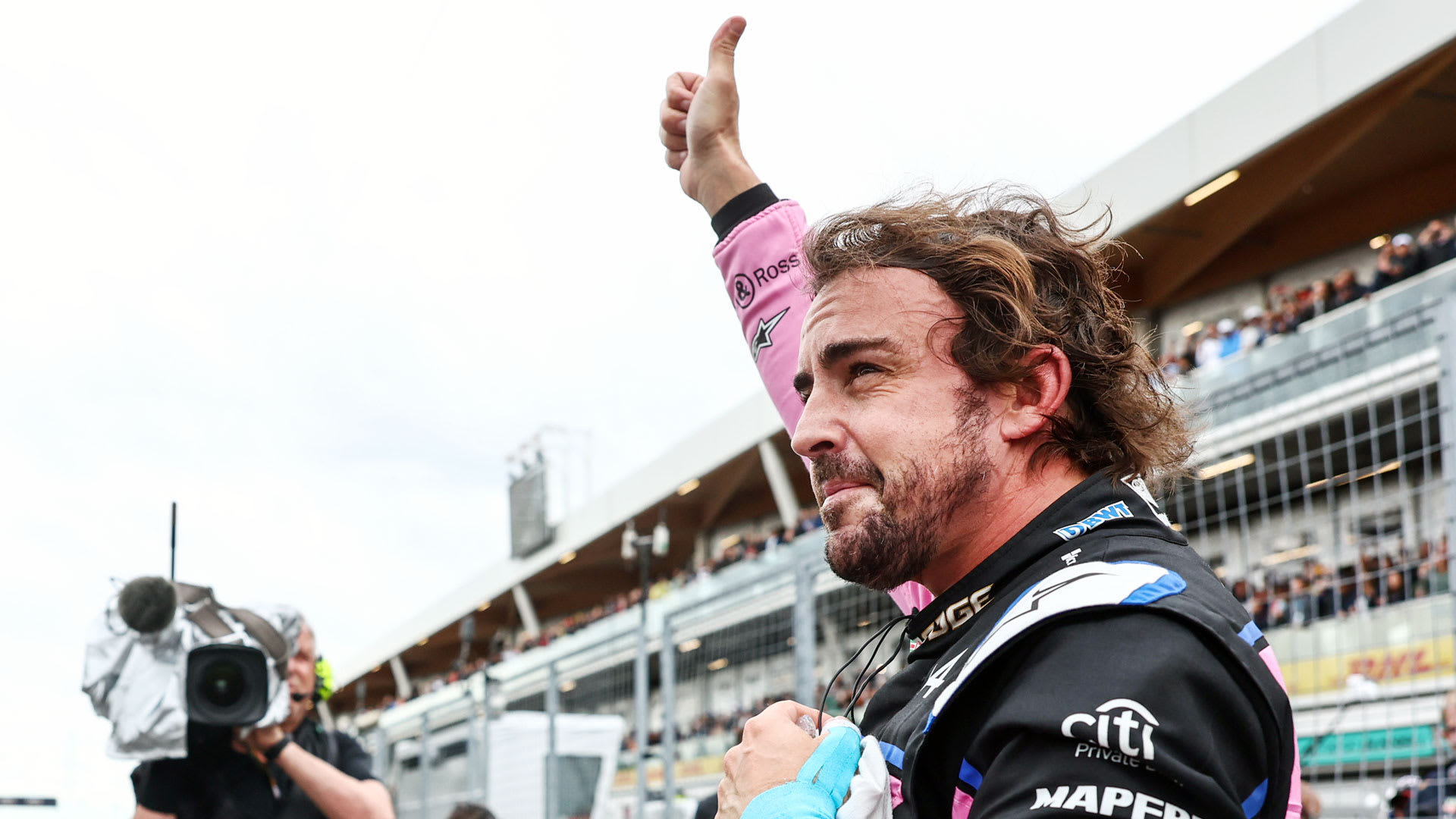 TREMAYNE: Why age continues to be nothing but a number for the masterful and mischievous Fernando Alonso

Could there have been a better front row for the Canadian GP than Max Verstappen and Fernando Alonso? The reigning world champion, who holds most of the youngest records of all time, versus the oldest man on the grid, who held so many himself?

“It’s been a while since Fernando and I have been side by side on the grid,” said Max – and they had never been side by side before, I was reliably informed. “I looked up to him when I was young, I watched Formula 1, he was up there winning races and championships, so it’s great to share the front row with him.”

Fernando gave his grim smile, clearly delighted to be doing so well, but not surprised by his own speed. “I think we will attack Max at the first corner,” he smiled.

I liked it all. Great box office.

The rain had made this qualifying session the most open of the season, and by far the most exciting. Seat fabric edge. Throughout all three sessions, lap times plummeted with the speed of machine gun fire, as the track literally improved lap by lap and one star replaced another again and again.

But there was a definite pattern. Max, in the Red Bull RB18, had the better car, it was more than obvious. And, boy, does he know how to use it. It was slippery and every time you ran into another car you risked losing crucial tire temperature. It was a credit to F1 driving standards that so few mistakes were made on a day when it would have been easy. Biggest box office.

READ MORE: Verstappen ‘in the shape of his life’, says Horner after Montreal ‘masterclass’

Q1 saw Max leading the timesheets with 1m 32.219s on Pirelli’s full rains, but there was Fernando, in Alpine’s ever-improving A522, right with him on 1m 32.277s, ahead of the Ferraris of Carlos Sainz and Charles Leclerc as they sandwiched Kevin Magnussen. Haas.

Conditions improved enough for the intermediates in Q2, and although this time it was a similar story, with Max fastest and Ferdy chasing him, the gap had widened dramatically: 1m 23.746s to 1m 24.848s, and this time behind them was the Mercedes of George Russell and Lewis Hamilton sandwiching Carlos.

So it all came down to Q3, when conditions continued to improve but, as the daring George Russell discovered, standing water in Turns 1 and 2 just militated against switching to soft slicks. .

Again Max was the man, quickly edging out the Mercedes duo with a prodigious lap of 1m 22.701s, but that was not the end. From the final stages he improved to 1m 21.620s, owner Circuit Gilles Villeneuve, and as George slipped and slipped, it was Lewis who took second place with 1m 22.891s. That too was good to see. The two enemies of 2021 side by side in the front row? Not enough…

Max hadn’t finished yet, as he improved further to 1m 21.299s to throw the pole out of everyone’s reach, but right at the end there was Fernando, and how he must have loved not only push Lewis from one spot, but also Carlos, whose 1m 22.096s had knocked the seven-time champion out of the front row. For the first time since Germany in 2012, at the time of Ferrari, Fernando grabs the front row, with a nice lap of 1’21”944.

BEYOND THE GRID: Fernando Alonso says he’s still aiming for a third title to cement his legacy (2021)

In the end, Fernando never attacked Max, and an engine problem hampered his race from the 20th lap. And at one point, when asked to stay behind Esteban as they battled for sixth place, he returned to Old Fernando as he ranted that he had been “100 times faster the whole weekend,” but it was the frustration that shone through as the warrior within him lamented. more of the reliability injustice that plagued his season. This was further stoked when the stewards later gave him a five-second penalty for weaving on the straight, which took him from seventh which he was already unhappy with, to ninth.

So, in the end, there was no fairy tale this time. But don’t tell me that Fernando’s performance this weekend didn’t add hugely to the drama and allure of the Canadian GP.

READ MORE: Alonso goes from P7 to P9 after being hit with a five-second penalty in Montreal

We live in an age that tends to champion youth, often to the detriment of age and experience. Many were surprised by Fernando’s fire and speed as he approached 41. Recently someone pointed out that he has been racing in F1 longer than the last up-and-coming Oscar Piastri has been on the planet (he made his debut Down Under on April 4, two days before Oscar was born, which also appears in the books of Alpine, in Melbourne). But if age is used to changing everyone, in the case of racing drivers, it is more often the case that passion and commitment give way to the physical side. But certainly not for Fernando, for whom age is just a number.

I remember Rupert Manwaring, the former commercial director of Minardi, was bragging about his talent in 2001 when he made his Minardi debut at Albert Park. At the time, eyes were on his fellow rookies: Juan Pablo Montoya at Williams was the IndyCar hero, while upstart Kimi Raikkonen had shown prodigious speed in testing for Sauber but was in trouble. great license internship after having made the jump directly from Formula Renault. In the end, Fernando would eclipse them both.

How we loved it in 2005 and 2006! After breaking through in Hungary in 2003 to give Renault’s unusual 111-degree V10 engine its only victory, it really earned its spurs by fending off Michael Schumacher to win the 2005 San Marino GP. , his driving eclipsed that of the German and put an end to his reign at Ferrari.

Ironically, things went awry when Fernando moved to McLaren for 2007. When he learned that Ron Dennis intended to put GP2 champion Lewis Hamilton in the second MP4-22 rather than fellow countryman Pedro de la Rosa, he would have replied: I don’t want to win the constructors’ title, then? But Lewis beat him, and although they each finished the season with four wins and 109 points, they lost in the final race in Brazil against Kimi Raikkonen, and Lewis beat Fernando for second place on the count at countdown with five second places to four.

Fernando left as a dudgeon at the end of a controversial and acrimonious year, and returned to Renault before joining Ferrari for 2010. Other championships surely awaited him. He is said to have cried for an hour in Ferrari hospitality in Abu Dhabi at the end of that year, when Sebastian Vettel edged him and his own Red Bull team-mate Mark Webber to snatch his first world title from the 11th hour.

Later empty-handed for new titles, McLaren’s surprise return to their troubled re-alliance with Honda prefaced the worst period of his career. But despite things like that pithy “GP2 engine” comment that stung Honda so much at Suzuka, that he never gave up. And as his teammate Jenson Button will tell you, you had to work very hard even then to get closer to him.

It all led to the adventure in Indianapolis in 2017 where he nearly won the famous 500 and proved his ability to a whole new audience. Success at Le Mans and victory in the 2018-2019 World Drivers’ Championship with Toyota brought him back into F1 orbit a changed man.

Once seen as an awkward team player who was only interested in his own well-being, he has returned sunnier, perhaps now at peace with the fact that he has never won as many titles as his prodigious talent deserved it. And clearly quick enough to lead a team. The new poster boy for the over 40s.

His friendship with Esteban is one of the most impressive things about the transition from Renault to Alpine. It’s a real master-student relationship, reminiscent of the one that Jackie Stewart and Francois Cevert appreciated in Tyrrell. Fernando drove for Esteban in Hungary last year, crucially holding off Lewis’ attack (and reminding everyone what he could still do), then encouraging his team-mate to “drive like a lion!” in Qatar to help him clinch his first podium since China 2014…

People say F1 is always better for having a competitive Ferrari, and the same is true when old warriors like Fernando add dimension by continuing to fight with all they have to delight fans around the world. . And it’s even better when they are passionate, frank… and always very, very fast.