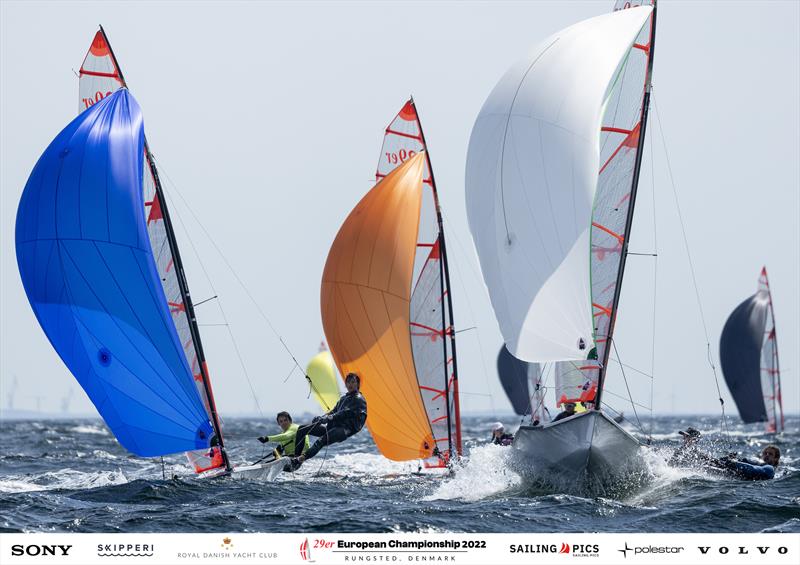 As Yanne Broers said aboard NED 2810: “We qualified in light wind and today was completely new conditions with big waves and more wind today.” The team is in 4th place in the Silver fleet.

The conditions a few months ago where we had the same wind conditions, so it was a normal day for us.”


New team in the yellow jersey

The New Zealand team of George Lee Rush and Seb Menzies won the day with an impressive 1, 1, 2 run and they are now top of the European Championship. Tom Goron and Mael Clochard of France managed to improve to a second place. It is also the best U-17 team. Defending European champions Denmark, brothers Jens-Christian and Jens-Philip Dehn Toftehøj got a few more points banked on day four – and are now in 3rd place overall. The top female crew are sisters Sara and Isabel Momplet Baixauli from Spain.

As well as providing world-class youth sailing, the Royal Danish Yacht Club and the 29er class organization have an important goal at the European Championship, which is to make a lasting impact.

As a host club, the RDYC has a number of sustainability goals, such as distributing recycled water bottles, water stations at the dinghy ramp, a paperless billboard and a boat collection of waste D POL, etc. Together with the Danish SailGP team, the Mini Impact League was formed, which is a competition where the team can score the most durability points. To encourage, give some advice and draw attention to the Mini Impact League, Martin Kirketerp, Olympic gold medalist in 49er and grinder from the Danish Sail GP team visited the championship on days 3 and 4. For both days remaining of the event, several sailors from the Danish Sail GP team will come by Rungsted Harbor to defend the same.

A Swedish sailor tried to do a little more while waiting for the wind: “I try to do little things every day. The Mini Impact League made me realize that other people are also into sustainable development. When SailGP and the Impact League shared my post and other people see it, I hope they get a little bit motivated to do something too,” says Elisa Lindskog from Sweden, who had her own little session plastic collection every day. This was shared on other channels on Instagram.

The deadline for the Mini Impact League competition is Monday at 12:00 p.m., where a jury made up of representatives from SailGP, SailGP DEN, the RDYC and the organizers of the 29er class selects the team which they believe has had the most impact. The winning team will be rewarded with tickets and a “behind the scenes” experience of the ROCKWOOL SailGP Grand Prix in Copenhagen.