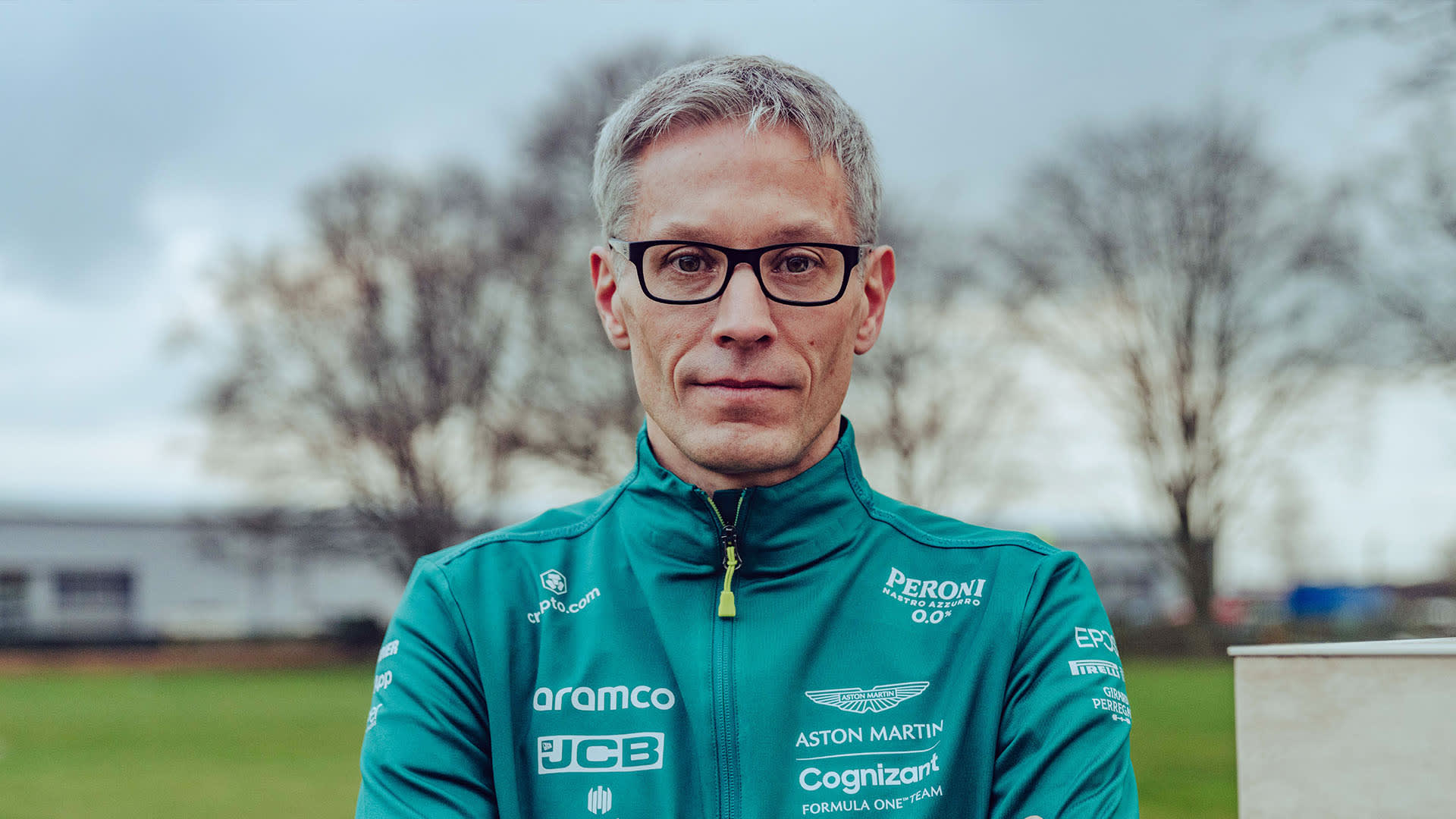 “I was in Petit Le Mans – and I probably caught Covid in Petit Le Mans,” says Krack, speaking on a Zoom call and smartly dressed in a no-frills V-neck sweater, sporting a no-frills pair of glasses. “I was sitting in my home office for two weeks in quarantine after testing positive [for Covid-19]. Then I got a call from a headhunting agency…”

Initially left in the dark as to who was interested in his services, Krack said it quickly became clear it was Aston Martin – and they wanted him to join the team in as team manager.

“I have to be honest,” smiles Krack, “I was [flattered] by the opportunity given to me. There were several meetings with Martin [Whitmarsh, Aston Martin Group Chief Executive Officer] and with Lawrence [Stroll, Executive Chairman] until we got to a point where we shook hands and said we could do it.

News broke in January that Krack would take on the role of team boss at Aston Martin, following the parting of ways between the team and Otmar Szafnauer – himself now taking the reins at Alpine.

Krack’s is not a widely known name in the F1 world, despite the Luxembourg native’s impressive career in motorsport – which includes a stint with Sauber/BMW Sauber as an engineer in the 2000s.

But it was his subsequent career away from F1 that caught him to the attention of Stroll and Whitmarsh, with Krack rising – after a stint with Porsche’s World Endurance Championship-winning team alongside the Current McLaren Team Principal Andreas Seidl – at BMW M Motorsport. Director, the job he was in when the headhunters came knocking.

And now, after more than 13 years outside the F1 paddock, he’s back. And his job is a big one: leading Lawrence Stroll’s five-year plan to turn Aston Martin into world championship contenders. And it’s clearly not a job the 49-year-old takes lightly.

READ MORE: Drivers have a ‘mountain to climb’ to get to the top of 2022 cars, says Vettel

“I think Formula 1 is like the Champions League,” says Krack, “and every professional football player wants to play in the Champions League. It’s the same with motorsport, [whether you’re] an engineer or a driver. So from that perspective, this is the ultimate place to be.

“At Aston Martin, yes, the pressure is there, but I think you have to turn that into positive pressure. Yes, we want to succeed. We have to succeed, but also, we have spent so much time and so much budget, and it’s not to be second or to participate.

“Obviously you can’t change and be…a winner from day one,” he adds. “But at the end of the day, it’s a huge challenge, but it’s also a huge opportunity that we have now. With this brand, the Aston Martin brand, we have all the ingredients you need to succeed.”

From outsider… to Mercedes beater?

Aston Martin may have briefly been a works team in F1 in the late 1950s and early 1960s. But the current team – bought by a Stroll-led consortium in mid-2018 – can trace its roots to Racing Point, Force India, Spyker and Midland, down to the original Jordan team which first competed in F1 in 1991.
The “Silverstone Team” has built a reputation as an underdog who consistently punches above its weight, a philosophy Krack says it would be “foolish” to undermine during his tenure.

READ MORE: ‘For many reasons we should be better off this year,’ says Vettel after Aston Martin unveils new AMR22

But work is underway on an impressive new 400,000 square foot facility – housing both a new factory and a new wind tunnel, and is due for completion in early 2023.

And then there are the high-profile technical signings that have been made, including former Red Bull man Dan Fallows as technical director, as well as Luca Furbatto joining Alfa Romeo and Eric Blandin transferring from Mercedes.

So can Krack – and should he really – try to maintain that underdog ‘Silverstone Team’ spirit, while trying to achieve Lawrence Stroll’s very publicly stated goals of turning Aston Martin’s legendary name into a leader? from F1?

“When you see this huge new building being built, it’s overwhelming,” says Krack. “[But] I think we have to approach this with humility. First you have to come here and understand how this team works.

PODCAST: Lawrence Stroll on signing Vettel, his collaboration with Schumacher and his Aston Martin master plan

“Because you have to remember that this Silverstone team is a great team; in all these years it has always exceeded its possibilities and it is important to know where the strengths of the team are, and where can we strengthen it, where can we improve some of its weaknesses.

“The infrastructure changes that are happening here, they are huge,” he adds. “It’s the first new F1 headquarters built in 19 years, so it will be state of the art, which clearly shows the ambition of Lawrence and the team. So, yes, it’s a five-year plan. we will have all the opportunities, or all the facilities, that you need to be successful We are progressing on our journey.

Teaming up with Vettel again

In a serendipitous move, Krack’s appointment to Aston Martin also sees him reunited with Sebastian Vettel. The German might be a four-time F1 champion these days – but in 2006 BMW Sauber commissioned then-race engineer Krack to bring 19-year-old Vettel up to speed on the rigors of F1.

“When Sebastian first arrived in Turkey in the third car, I was the race engineer!” laughs Krack, referring to Vettel’s infamous debut on Grand Prix weekend in Istanbul in 2006, where he was fined for speeding in the pit lane six seconds into his F1 career .

“So that obviously created a bit of a special bond between him and me. Last week he said “remember when we first raced with our car?” I think we have a very good relationship. We haven’t been in touch so much in the years since I left Formula 1, but when we met again it was as if we had seen [each other] yesterday, so it was very, very good to catch up.

But with Vettel now in the final stages of his career rather than starting, what do Aston Martin and Krack need to give him in the short term to keep his mind from turning to a world outside F1?

“It’s clear that a guy like Sebastian, quadruple world champion, he doesn’t want to be 15th or 12th or P8. It’s clear,” says Krack.

“I think Sebastian is a smart guy, so he won’t just focus on this year’s car or whatever, but will focus more on what’s going on and if he sees the potential in it.” If we manage to offer him that, I think we have a chance to keep him longer.

“Our job is to deliver the right package,” adds Krack, who will also oversee the performance of Lawrence Stroll’s son Lance in the second AMR22 this year. “So Sebastian will stay, and other drivers would like to join us.”

Now ensconced in the Aston Martin team – and with a “fantastic Aston Martin DB11” company car parked in its driveway – Krack’s first job will be overseeing the running of the team during the official pre-season test. in Bahrain from March 10 to 12. , before the start of the season on March 20.

Seventh in the constructors’ standings in 2021 is a result that Lawrence Stroll will certainly not want to see repeated at Aston Martin in 2022. But what will a good season look like for Krack?

“First of all, we have to have a very, very competitive car. That’s the key,” he replies. possible high.

“If we can do that, we will be in a very good position at the end of the year. We must not forget that we also have very, very strong competition and we must respect what they are doing.

“But we have to try to be better in those areas and see at the end of the year where we are. If we can make that comment here in Abu Dhabi, I will be a very happy man.

Another month ! The 2022 FORMULA 1 STC SAUDI ARABIAN GRAND PRIX prepares to welcome the return of F1 to Jeddah