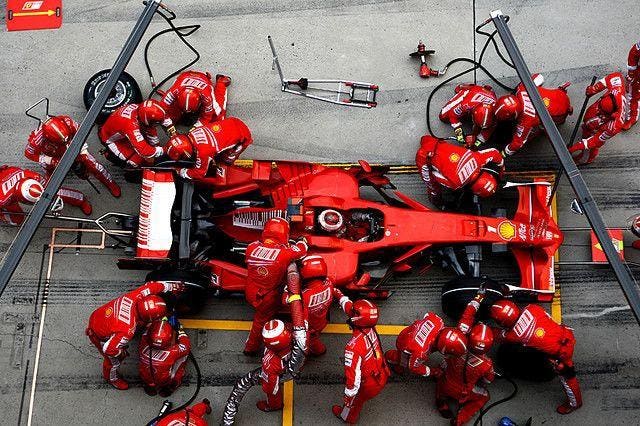 Like millions of others, I’m a big fan of Formula 1 motor racing. This weekend, I’m heading to Montreal to get sunburned watching the Canadian Grand Prix, and the opportunity think about one of my favorite innovation case studies in history – and how it is more relevant today to me (and I suspect to you) in today’s topsy-turvy marketplace than ever.

Here’s an edited excerpt from when I talked about it in my 2014 book Smartcuts: The Revolutionary Power of Lateral Thinking:

In the mid-1990s, local outrage erupted over distressing news at Great Ormond Street Hospital (GOSH), a children’s clinic in London: the beloved 150-year-old medical establishment, to which JM Barrie had bequeathed the rights to his play Peter Pan in 1929, was killing children.

Not on purpose, of course. But an incredibly high death rate plagued the facility’s cardiac department. Doctors studied the hospital’s surgical processes and determined that a large number of

deaths have occurred due to problems during transfers between the operating room and the intensive care unit.

The risks of opening a small child’s chest cavity and repairing their heart are already terribly high. But once she’s stitched up, medical staff must transfer all their life support equipment – monitoring lines, ventilators, vasodilators – not one, but two:

First between the operating room and a wheeled bed for transportation, then back to an intensive care bed. The process usually takes about 15 minutes.

There were plenty of opportunities to screw up during the redesign, but the knowledge transfer was particularly concerning. When the nuances of each particular case learned in surgery were lost in the transfers, the patients suffered.

For years, medical staff, exhausted after marathon surgeries, simply tried to do better in shifts. No one wanted these children to die. But not only did errors persist, 30% of

Transfer issues suffered from both equipment and information errors – the staff messed up twice.

They tried to do what most of us have been taught to do when we encounter difficult problems in our industries: look at best practices. How do others do this work? Who does it best?

But it turned out that other hospitals also had these problems. Problems were worse with smaller patients (eg children), but no matter where you looked, you couldn’t find a hospital that did things better. “Best practice” was not good enough.

One day, after long surgeries, two weary doctors, Martin Elliott and Alan Goldman, sat down in front of a television for a break. Unbeknownst to them, this short break would change everything for the hospital.

“I had done a transplant, then an arterial change in the morning, and we were both pretty knocked out,” Elliott said. “Formula 1 came on TV just as we were sitting down.

Doctors watched the drivers race down a race track at 300 kilometers per hour. Then a car pulled up to the side of the circuit for a pit stop, “and we just realised,” Dr Elliott said, “that the pit stop where they changed tires and refueled of fuel was almost identical in concept to what we are doing during the handover.

Within seconds, the pit crew ripped off four tyres, filled a gas tank, screwed on four new tires and pulled out of the way for the car to return to the track. Working as if controlled by a hive mind, Formula 1 crews made GOSH staff look like monkeys fighting over ventilator tubes.

“So we phoned them.”

Before long, the GOSH medics found themselves hanging out with a team at the Ferrari pit in Italy. The mechanics demonstrated their process to the doctors up close and in detail.

Right away, the GOSH team observed several differences between the Ferrari routine and theirs. The pit crew meticulously planned out every possible scenario of what could go wrong during a transfer and practiced each scenario until it became habit; GOSH staff, on the other hand, handled surprises on the fly.

Ferrari crew members operated with a lot of physical space between them; hospital staff constantly got in the way – because of the small space, they said. But a dozen grown men with power tools managed to congregate around such a small space during each race without encumbering anyone.

Finally, the Ferrari pit crews had a dedicated overseer who ran the show. This overseer, often referred to as a “lollipop man”, stood in the background to holistically oversee and direct the operation. It was not until he waved his flag that the car was allowed to return to the track.

In a hospital ward full of surgeons, anesthesiologists and nurses, there was no conductor or lollipop man. Each staff member simply helped where he or she thought help was needed.

Finally, the GOSH doctors noted that the Ferrari technicians were working in silence. In contrast, hospital transfers were full of chatter; they not only talked about what was happening (“the ventilator is back on!”), but just chatted during the procedure.

When the doctors returned to London, they hired a dance choreographer to practice the moves and add space to the small work area around a hospital bed. They turned the transfer rush into a routine, where each staff member had a prescribed set of actions. Contingencies for various scenarios were mapped and then practiced. The anesthesiologist in a given practice became the “lollipop person,” stepping back to observe and direct.

And everyone was silent.

Within a short time, the hospital had reduced its worst transfer errors by 66%.

Formula 1 pit crews had a similar challenge to GOSH medics attempting transfers. But F1 crews saw the problem from a different angle. As a result, they had developed different tactics to tackle the problem. And when the GOSH team imported these tactics from F1, they immediately had a breakthrough.

I thought about this lesson lately for my business SHOWRUNNER. There are many things in the world of film and television production that “just are” – and seem impossible to do otherwise, despite the hard work and the long hours. One of our big breakthroughs was to borrow from the insights and heuristics of agile software teams.

A film crew and a software crew both work to build a Big End product that has many moving parts, many of which depend on the completion of other parts beforehand. Yet the software industry has found ways to speed up the process of building Big End products, with sprints and iterations, automated testing, and tools that make it easy to share information. And these are the types of tactics that can fundamentally change the game in the adjoining film industry.

We also borrow from other adjacent industries, to the point where my ironic “best practice” is now “don’t look for best practices; look for side practices.

In other words, the next time you’re stuck, I suggest you ask yourself the equivalent of: how could a pit crew approach this problem?

Shane Snow is an international bestselling author, investigative journalist and renowned speaker. He is CEO of the film technology company SHOWRUNNERfounder of the innovation skills training center Snow Academy and author of Dream teams and other books on human behavior, storytelling, and innovation.

If you liked this article, I would be honored if you followed me on LinkedIn!